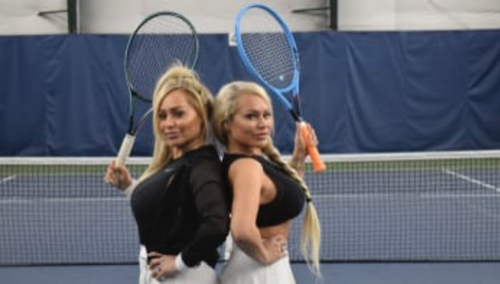 Tonight on TLC their new reality show Darcey & Stacey premieres with an all-new Sunday, August 16, 2020 episode and we have your Darcey & Stacey recap below for you. On tonight’s Darcey & Stacey season 1 episode 1 “Everything Is About To Change,” as per the TLC Synopsis “Twins Darcey and Stacey are at different points in their lives. Darcey is healing after another failed relationship, while Stacey is preparing for the arrival of her Albanian fiance, Florian, who is coming to America on a K-1 visa.”

In the past, Darcey had an extremely toxic relationship and then moved on to Tom’s show as a free spirit. They also didn’t work out. Stacey just wants her sister to find love as she did with Florian, a younger model. They had a worldwide love. They were engaged within 10 days of physically meeting one another. He has applied for his Visa and now she waits for him to come to the U.S.

The sisters head to play tennis. They once wanted to go pro. In high school, they used to play. Back then they were shy and introverted. They wore glasses. Boys didn’t like them. They talk about Tom. Darcey shares that she has blocked him. She is moving on. She is going to focus on herself. She shares that she has been on several dating apps and some of the men she has been talking to are better than Florian. Stacey hates that she is trying to one-up her. She shares that Florian is coming to see her soon. She only has 90 days to decide and marry him. Darcey doesn’t share her thoughts but she is suspicious about him.

After tennis, Stacey feels guilty because she is going to do something really bad that is going to tick her sister off. She heads to a restaurant to meet Tom. He brings her flowers. He wants her to tell her sister that he is sorry. He cannot tell her himself because Darcey has blocked him. Stacey tells him he needs to stop trying to reach out. Let her sister be happy and have peace. It was rude he called her fat and treated her so badly. He apologizes and questions if Darcey was ever in love with him. She used to bring up her ex a lot.

After their meeting, Stacey leaves unsure if she will tell Darcey she met with Tom. Back at home, Darcey and her dad make a meal. Their father discusses how the twins are different but very much the same. He loves them both and finds them very complex.

While cooking, Darcey reveals to her dad that she has found photos of Florian and other women online. She doesn’t trust him. Their dad plans to talk to him man to man when Florian visits.

That night, Darcey and Stacey’s divorced parents come over for dinner. They all eat tacos. Their parents split when they were 12 but now get along.

Stacey knows she needs to tell Darcey about Tom but doesn’t want to right now. At dinner, her mom asks about Florian. She didn’t share his visa was approved. She is a bit private like her dad, who eloped with his second wife and didn’t tell them right away.

At dinner, the family talks about Tik Tok which leads the sisters to share a song they wrote and sang. Their parents both laugh while Darcey’s daughters look embarrassed.

The next day, Stacey calls Florian by Facetime. They talk about him coming to visit soon. He seems very relaxed while Stacey thinks he might be in for a rude awakening given that she is an independent woman. She is excited to be with him but remembers their troubles months back when he was seen in photos with another woman. He told her the woman wanted to take photos with him but knew he had a girlfriend. He has since blocked her.

Stacey calls Darcey in to help her find some cute clothes to wear when she sees Florian. They are meeting in New York where they plan to stay for a few days. Darcey gets sad, remembering when she went to meet Tom. She isn’t sure about Florian since the photos. Darcey vents about her feelings and Stacey gets mad. Florian is not Tom.

Stacey and Darcey head out. Darcey helps her in the car. They say goodbye. Stacey heads to New York. She has butterflies. She gets to the airport and puts on her heels. At home, Darcey is nervous and sad. She doesn’t want her sister to just get married because of the visa and the limited time.