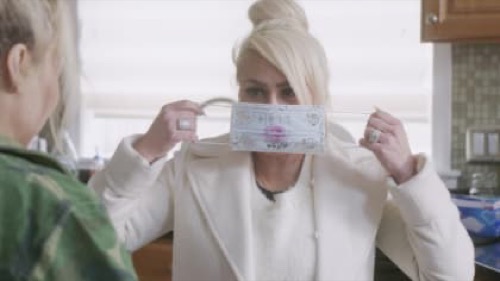 Tonight on TLC their new reality show Darcey & Stacey premieres with an all-new Sunday, September 13, 2020 episode and we have your Darcey & Stacey recap below for you. On tonight’s Darcey & Stacey season 1 episode 5 “Clashes and Curve Balls,” as per the TLC synopsis “Darcey and Georgi enjoy the afterglow of their date in NYC; Darcey’s plans to go to LA with Stacey may change after Mike says a news about the twins.”

Darcey and Stacey have been quarantining for about a week now and it is life-changing. Her daughters miss school, one of them just got her dress for prom and now may not be able to wear it. Darcey says she can have a virtual prom on Tik Tok. They arrive at the grocery store, everyone puts their masks on before they go in. Darcey always worried before with her girls, now with the pandemic, she is going to worry more.

They find that a lot of the shelves are empty. Mike knows the virus that came from China is deadly and he just encourages the family to spend more time with each other. Once back home, the family goes on the lawn and does yoga together. Darcey is worried about Georgi, she can be with her family, but he can’t be with his. Mike asks her if she is getting married. He currently knows nothing about Georgi, and he knows that Darcey can move very fast and without caution.

Stacey and Florian’s apartment was shut down due to the coronavirus. They’re moving into a hotel until they can find a more permanent solution. Shortly after moving in, Stacey discovered a new video of Florian on social media. The video shows him with the same woman he was previously pictured with. Stacey has always given Florian the benefit of the doubt, but this time, she wants to know the truth about what happened.

Stacey confides in Darcey, that the women who Florian posed with, posted a video of her and him in a hotel room. Darcey watches it and tells Stacey she doesn’t like it, it fires her up and puts a bad taste in his mouth. Darcey had little trust in him from the beginning and now this makes her trust him even less. Stacey says every time she mentions it Florian doesn’t want to talk about it and says the women are making more of nothing.

Darcey finds it hard to be away from Georgi, she doesn’t even know when they will be able to see each other again. She asks him to visit her, but he doesn’t want to put her at risk and tells her to wait and see what happens, maybe another ten days.

Stacey meets with Florian, ever since she found out about the video, they haven’t spoken. She tells him that their marriage is on the line, and he should never have met with her. She thought it was over months ago, but this woman keeps posting stuff. She asks him eight out if there is anything else she needs to know, and can she check out his phone. He tells her that nothing happened, he never slept with her. He says that she lured him to her room, she tried to kiss him and take pictures of it. He allows her to check his phone, she doesn’t want to, but she needs peace of mind. Stacey chooses to believe him. Florian gets down on one knee and asks her to marry him again.

Clearly something went on between Florian and this woman, and Darcey did some investigating; she has the woman’s number and Facetimes her, Shanti. Darcey says let’s keep this simple, just tell her her side of the story. She says that Florian approached her on Instagram and said that he was in a relationship with Stacey for four years and felt like he was on a leash. She feels like she is the victim in this, Florian lied to her, she was made to believe that he was no longer in a relationship with Stacey. She says it is not her fault that Florian wants to taste her honey. Darcey asks if she had sex with him, she says what do you think. Darcey doesn’t like it, the woman is playing games with Darcey and it looks like she is enjoying it. Darcey hangs up on her.