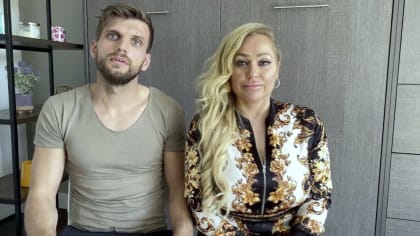 Tonight on TLC their new reality show Darcey & Stacey premieres with an all-new Sunday, September 27, 2020 episode and we have your Darcey & Stacey recap below for you. On tonight’s Darcey & Stacey season 1 episode 7 “Race To The Altar,” as per the TLC synopsis “Darcey and Stacey seek shelter from COVID-19 in apartments down the hall from each other. Relationships are put to the test when Darcey invites Georgi to quarantine with her and Stacey decides to secretly exchange wedding vows with Florian.”

Darcey has been in the lockdown, her daughters are home because their school is closed. She finds it really scary to have life change like this. Darcey doesn’t plan on telling Stacey what happened when she spoke to the women that was in the hotel room with Florian. Darcey has been spending a lot of time speaking to Georgi. They have decided to move in together. Aspen and Aniko are bored at home, they see their mom pack up to leave; they are excited because with her leaving, they will get their own room. Darcey tells them that moving in with Georgi will show her if this is going to work. Her daughters are worried about her and don’t want her to get hurt again. Darcey tells them that she is looking towards the future. Darcey is sad that her daughters are worried about her getting hurt in this new relationship. Darcey’s dad is happy for her, and he just wants her to be happy, and this will give him time to bond with his grandchildren.

Stacey finds that everything is limbo right now, but they still have to get married because Florian’s K1 visa is going to expire. Stacey says her dream wedding would be in a castle in Italy. They have decided to move the wedding date up, Stacey says it feels right even though it is not how she dreamed it would be. Stacey tells Florian it is better to keep this to themselves and tell their families later because they don’t need people in their ears right now. Stacey knows there are trust issues, but she doesn’t want to hear negative comments, it is nobody’s business but their own.

Darcey is moving into her new place that she will be sharing with Georgi. Meanwhile, Stacey found an apartment in the same building for her and Florian, so they will be neighbors. Darcey tells Stacey that she has to get the apartment ready because Georgi will arrive and she wants things to look nice. Meanwhile, Georgi is about to hit the road, on his way to meet Darcey. Georgi doesn’t think there is anything wrong with moving in with Darcey because the two times they met, they got along very well. Georgi doesn’t want to go empty-handed, he stops to get some roses for her, he wants her to feel very special. Georgi arrives, Darcey is super excited.

Darcey and Georgi lay on the bed and feed each other strawberries – then they head in the shower together.

Today is the day that Stacey is getting married, she is excited and nervous and can’t believe she is doing her own hair and makeup on her wedding day. The person officiating the wedding arrives at the apartment. Floridan has lined candles on the floor, with a heart and the date to surprise Stacey. She is dressed in her wedding gown, and comes down the hallway.

It doesn’t take long to say their vows, but the license is from Middletown, and the vows have to be said in Middletown. Everyone gets in the car and drive to Middletown. They are taking a risk by going to Stacey’s dad’s house to get married, she hopes everyone is sleeping. They make it to the house and say their vows again, right outside the front door, and luckily, nobody wakes up.

Darcey and Georgi had a beautiful, magical night. He is having a shower, and she goes in to surprise him. He blows her kiss and joins him. While Darcey was in the shower, she got a text from the girl who was in the photos with Florian. She says that she has proof of her and Florian being intimate, she sends a video. They clearly are not having sex, but it was intimate.

Stacey is thrilled that she is married, although they can’t go on a honeymoon, she has a few surprised for him. They sit on the floor and enjoy a bottle of champagne.