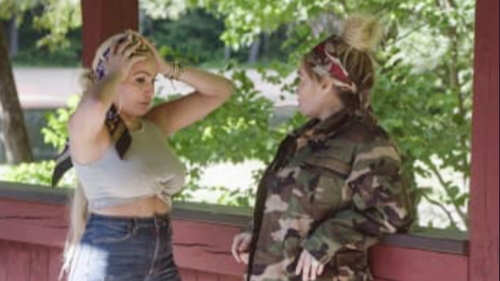 Tonight on TLC their new reality show Darcey & Stacey premieres with an all-new Sunday, October 4, 2020 episode and we have your Darcey & Stacey recap below for you. On tonight’s Darcey & Stacey season 1 episode 8 “Ultimate Betrayal,” as per the TLC synopsis “After an eventful quarantine, Darcey and Stacey finally reunite for a couples’ picnic. Stacey can’t wait to share the news that she and Florian got married, but Darcey has news of her own that jolts Stacey out of her honeymoon phase.”

Darcey has been keeping a secret. She hasn’t wanted to talk about it before and she was only bringing it up tonight because she needed to talk to someone other than Georgi. It turns out Georgi was still married. He met his ex-wife at a modeling event and the two grew serious. They got married. They got separated and that’s all Georgi is. He’s just separated. He’s still a married man and that was difficult for Darcey who grew up with a traditional mindset. Darcey didn’t want to be with a married man. She said if she knew he was still married then she never would have moved in with him and so Darcey wants Georgi to get a divorce.

Georgi said his marriage is over. He now has to prove it with a divorce. Darcey told him he needed to see a lawyer and Georgi wasn’t jumping at the chance of seeing one. He seemed just fine with the current state of his marriage. He was in no rush to get a divorce and he didn’t see how much this was affecting Darcey. Darcey has been in quite a few bad relationships. She’s seen how it takes a toll on her relationships with her family and most especially her daughters. Her daughters were tired of watching her get hurt. They wanted Darcey to find a man who loves her and Darcey thought she did just that with Georgi.

Georgi and Darcy have a great connection. They’ve been living together during quarantine and everything else in their relationship seemed to be working. It was just this marriage that was standing in the way. Georgi wasn’t in any rush to do something about it and that was taking a toll on Darcey. She wanted a clear mind. She also didn’t want to feel like she disappointed anyone by being with a married man and so the secret was eating at her. Darcey was also keeping a second secret from her twin sister Stacey. Stacey’s then-fiancé Florian was in a video kissing and making out with another woman. Darcey had gotten her hands on this video and she knows now she needs to share it with her sister.

Stacey deserved to know. Only Stacey secretly married Florian behind everyone’s back and so its no longer her fiancé’s infidelity. It’s her husband’s. Stacey ignored earlier rumors and signs about Florian’s cheating. She allowed him to explain it all away. She also married him secretly because she didn’t want to hear anything negative against him. Stacey married Florian and now she has to face the consequences of that action. Stacey was thinking of coming clean about her secret the same time Darcey was coming clean about one of hers. The twins decided to meet up. They each brought their partners and this was the first time Stacey met Georgi.

Darcey had been hyping up her boyfriend to Stacey. She made it out like Georgi is the Bulgarian God and so Stacey began comparing her man to Georgi because she secretly thought Darcey would compare the two men as well. The sisters have a competitive side to them. They did this comparing game when Darcey was with Tom and it hadn’t ended well, but here they were doing it again and there were more important issues to be discussed. The four of them went on with their picnic. They were seated down and they were all talking when Georgie admitted that he’s still married. He told everyone he was in the process of getting a divorce.

Georgi explained how he found himself still married. He also added how with the courts being closed that he’s unable to get his divorce soon and that there’s nothing the lawyers could do about it. Georgi was in one place and his ex-wife was in Maryland. They haven’t spoken in more than a year and so the marriage is truly over. Georgi is ready to move. He has moved on with Darcey and Darcey asked Georgi to come clean to her sister because she wanted the truth out there. She never expected Stacey would say that Georgi’s isn’t the only one married. Stacey revealed she married Florian.

The news seems to have hurt Darcey. She lived down the hall from her sister and so her sister could have invited her, but Stacey said she didn’t invite Darcey because the last time they saw her, she had been upset with both Stacey and Florian. The couple, therefore, didn’t want any negative feedback at their wedding. They secretly got married. They cut out Darcey and so Darcey later pulled her sister aside. She thought Stacey deserved to know the truth. She showed Stacey the videos she got from Florian’s girlfriend and those videos were a shock to Stacey. Stacey became very upset watching those videos.

It hurt to watch her husband stimulate sex with someone else for laughs. Stacey broke down in tears and she was just done with this picnic. Stacey went back to the guys. She told him the disgusting things she saw and she fled from Florian. Florian naturally blamed Darcey for his argument with his wife. He didn’t take responsibility for being in the bed with another woman or taking videos of them stimulating sex. He didn’t say he was sorry for lying to Stacey about his relationship with this other woman. He just blamed Darcey and ultimately it was Darcey who gave him a ride back home.

Stacey abandoned Florian at the park. She hadn’t wanted to be in the same car as him and so Florian got a ride from his sister-in-law. He returned to the apartment to find Stacey crying in bed. Stacey is so heartbroken she isn’t sure if she can forgive Florian.

And so now its Stacey with the romantic troubles.