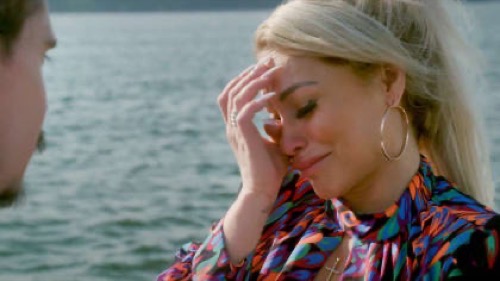 Tonight on TLC their new reality show Darcey & Stacey premieres with an all-new Sunday, October 18, 2020 episode and we have your Darcey & Stacey recap below for you. On tonight’s Darcey & Stacey season 1 episode 10 “Trouble In Paradise,” as per the TLC synopsis “Stacey and Florian head to Rhode Island for their mini-moon and invite Darcey and Georgi to join them. When Darcey questions Georgi about another woman, however, a dream vacation turns into a nightmare and a relationship is put in jeopardy.”

Stacey and Florian took a mini-honeymoon. They weren’t able to have a full honeymoon after they got married because they were in lockdown thanks to coronavirus and there had also been that drama surrounding videos and photos of Florian with another woman. He now swears all he did was kiss this other woman. He says he doesn’t love this other woman. He loves Stacey and so Stacey is choosing to move past the cheating allegation. She trusts her husband when he tells her nothing happened. She and Florian wanted to move on and they were doing so with their honeymoon. They were going to Rhode Island. They had originally planned on having a wedding followed by an amazing honeymoon. And that didn’t happen for them.

Their wedding was small. It had just been the two of them and the official that married them. Their honeymoon was only going to be a tad bigger. The couple had invited Darcey and Georgi to come with them to Rhode Island. Darcey and Stacey are twins. They do share a lot and they were both looking forward to getting away. They wanted to escape the boring life of lockdown. Stacey and Florian wanted to celebrate their honeymoon in style. They got a big house near the water and later on her sister joined them with her own beau. Darcey and Georgi have been getting along. They seemed to really like each other and Darcey was happy.

It’s been a long time since Darcey has been happy. She was previously in several relationships with manipulative men and so she was grateful when Georgi turned out to be different. If there was one flaw he had, it was the fact he was still married. He was getting divorced from his ex when the pandemic hit and the courts closed down. This means he’s currently stuck being a married man. Georgi hasn’t spoken to his ex since this all went down and that’s fine with Darcey. Darcey can get jealous. She was jealous enough of the attention Georgi gets online from other women and she was also jealous that he was still on speaking terms with several of his exes.

His exes still text Georgi. They were texting him on his ride to Rhode Island with Darcey and that made her concerned. She wants to trust Georgi. She really does and yet she can’t stop herself from questioning things. She questions why he’s still in contact with so many exes. She questions if he tells his family about her and she brought up that latter one at dinner. Georgi had mentioned how he checks in back home to find out if everything’s good. He was telling them what it’s like back in Bulgaria when Darcey’s curiosity reared its ugly head and she couldn’t help asking if his family knew about her.

Darcey was picking an argument with him. She was doing so because she knows one of Georgi’s exes recently had a baby and this same ex had also posted fire emoji under one of Georgi’s pictures. Darcey naturally made the leap that this new baby is his. She asked him about it after she picked a fight and he denied it. He said all he did was talk to this woman a year ago. He said this woman couldn’t possibly have gotten pregnant over social media and so he denied this one the whole way. Georgi had no idea where Darcey was coming from. This all came about because of a fire emoji and that just doesn’t make sense to Georgi.

Darcey ended up running back into the house after dinner. She was in tears and her sister had to comfort her. Stacey did her best to be there for Darcey. She didn’t understand where Darcey was coming from with her accusations and only Georgi understood. Georgi realized Darcey was this paranoid because she had been hurt so many times in the past. Darcey was scared to trust again in case her heart was broken, but deliberately pushing Georgi away wasn’t going to help her either and all it did was frustrate him. Georgi didn’t have a child with his ex. He didn’t lie to Darcey about anything and so he said in his confessional that Darcey needed to stop looking for red flags.

Only Darcey came to regret what she did. She said she had too many drinks at dinner and that she was feeling embarrassed by the next morning. She hadn’t meant to accuse him of fathering a child. She hadn’t meant to call him a liar and so she’s truly worried that she pushed him away. Georgi had packed a bag. He said he didn’t feel comfortable anymore or excited anymore. He had gotten a ring for Darcey and, after that scene, she made at dinner, Georgi didn’t feel like proposing. He just wanted to check out. He began ignoring Darcey and Darcey couldn’t take it. She tried to get his attention. She tried to get him to talk to her and he chose to take a walk by himself instead.

Florian went after Georgi. He wanted to speak with the other man to see if he could help and the two talked about the ring Georgi had. Georgi told Florian he planned on proposing to Darcey. He also said he didn’t know if he and Darcey could move past her trust issues and Florian suggested that Georgi propose anyway. He said Darcey would trust Georgi more if she was engaged and so Georgi took Florian’s advice. He rented a boat and he went out on the water with Darcey. He was telling Darcey that they needed to get over the past if they were ever to have a future together and she once again brought up his divorce.

Darcey said she doesn’t want to feel like her time is wasted. She said if Georgi doesn’t want a divorce then maybe they shouldn’t be together and so she asked Georgi what is that he wants. Does he want a future with her? She needed to know because she didn’t want to waste her time and so Georgi brought out the ring. He wanted to prove to Darcey that he does envision a future with her. It probably wasn’t the most romantic proposals there were, but it showed his commitment and so that had to be enough for Darcey. Darcey hadn’t rushed into saying “yes” to the proposal. She had needed a minute and after she got it she said “yes”.

Darcey loves Georgi. She now believes all the pain she went through with past relationships was to pave the way for Georgi and so Darcey is ready to make her peace with the past.

She’s in love and she’s getting married.