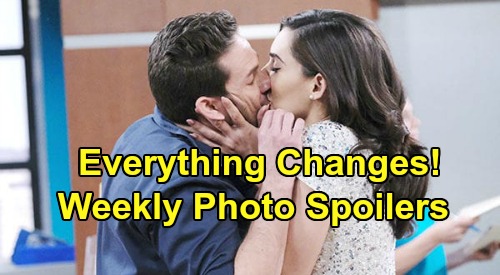 Days of Our Lives (DOOL) spoilers tease that viewers are in for an exciting week on the show, with a wedding, a wedding gown disaster, a major verdict, DNA test results, and a major return. That’s a lot to digest, and we’ve got the scoop about what viewers can expect during the week of June 29th, with some help from the DOOL spoiler pictures for the week. Keep on reading to learn more about what’s coming this week! 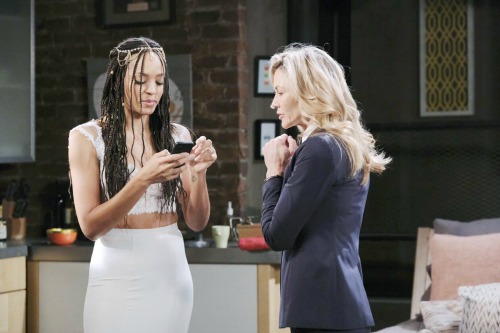 Lani Receives Help From Someone Unexpected

First off, Lani Price (Sal Stowers) will delight in her visit with Kristen DiMera (Stacy Haiduk). As DOOL viewers know, Lani was completely surprised when Kristen showed up on her doorstep disguised in a nun’s habit. According to DOOL spoilers, Lani and Kristen will have a great BFF reunion, although Lani will be concerned about her bestie, since Kristen is still on the run and risked a lot by coming back to Salem. The friends will enjoy their short time together, as Kristen helps Lani get ready for her wedding. 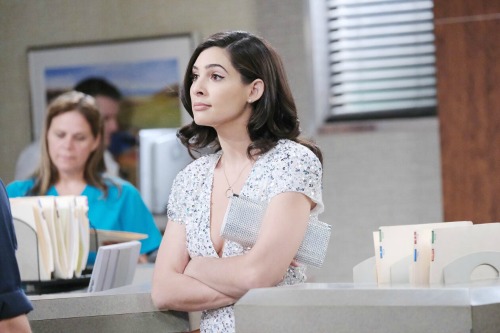 Well, it looks like Gabi DiMera (Camila Banus) will get some swift justice in the legal case against her. As DOOL viewers know, Gabi has been accused of drugging Abigail DiMera (Kate Mansi) and attempting to drug Jake Lambert (Brandon Barash). Gabi’s verdict is scheduled to come down on Monday, June 29th, and given that Gabi will be out and about for the remainder of the week, it looks like the news could be good for her – either that, or she’ll be free while awaiting sentencing! 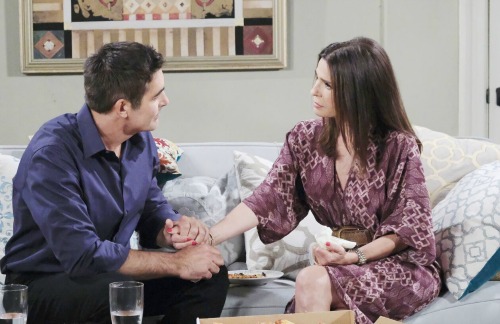 Next, it seems that Hope Brady (Kristian Alfonso) will be on hand again to help out Rafe Hernandez (Galen Gering). Rafe has been having a tough time lately since he lost custody of David Ridgeway (Kyler Ends), and Hope has been there for him as a friend. The friendship has been good for both Rafe and Hope, since they’ve each recently come away from major ordeals – Rafe with David’s custody case and Hope with the Princess Gina Von Amberg (Kristian Alfonso) debacle. It looks like we’ll see “Rope” share some warm moments together this week. 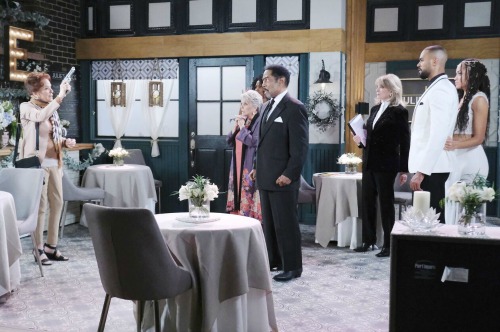 Eli Grant (Lamon Archey) and Lani’s wedding is going to be anything but ordinary, as some major interruptions will occur before they finally tie the knot. The good news here is that they WILL end up getting married, but they’ll get interrupted first by Gabi, then by a medical emergency when Lani’s mom Tamara Price (Marilyn McCoo) faints, and then when a gun-wielding Vivian Alamain (Louise Sorel) interrupts wanting revenge on Lani. It’s going to be quite an ordeal for everyone to endure. 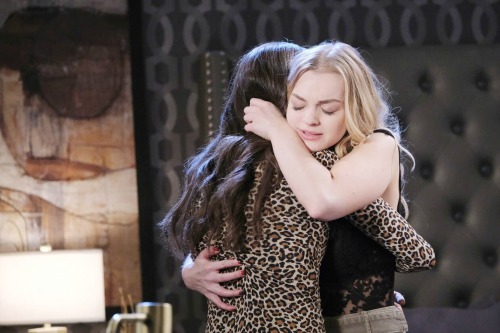 Next, Claire Brady (Olivia Rose Keegan) is going to fulfill her maid of honor duties as she helps Ciara Brady (Victoria Konefal) with wedding planning. Ciara’s wedding to Ben Weston (Robert Scott Wilson) is rapidly approaching, and there will be much to do. Claire really seems like she wants to make up for all the horrible things she did to Ciara, and she’ll do her best to be helpful and get her relationship with Ciara back into BFF territory. It looks like Ciara will be a bit guarded at first, but that she’ll really warm up as she goes gown shopping with Claire. 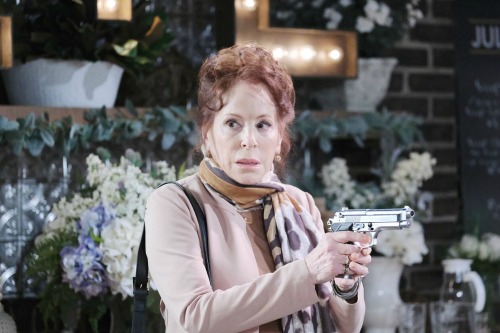 As we mentioned earlier, Vivian will be one of the interruptions at Eli and Lani’s wedding, and it will be a pretty major interruption. Vivian is obviously still raw over Lani’s shooting of Stefan DiMera (Brandon Barash), and she’ll have “an eye for an eye” in mind. Wanting to kill Lani, she’ll rant and rave and wave her weapon around, and DOOL spoilers say that Lani will make an impassioned speech to try to disarm Vivian.

Lani’s speech won’t work, but fortunately Rafe will come along and tell Vivian that Stefan may still be alive and living in Salem in the form of Jake. That will stop Vivian in her tracks, and it will allow Rafe to apprehend Vivian and the wedding to continue. 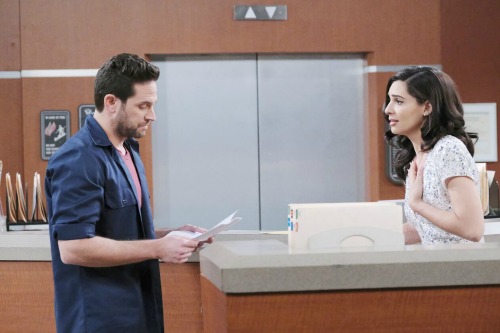 Well, everyone has been wondering about whether Jake could really be Stefan, and this week, we’ll get some answers in the form of the DNA test that Gabi had run. Gabi had DNA samples from Jake and Stefan compared, and DOOL spoilers say that the results will be shocking, but what will they show? Will they show that Jake is Stefan? That would certainly make both Gabi and Jake reel. But the results could also come back inconclusive or strongly suggesting that Jake is Stefan, which could also fit here. 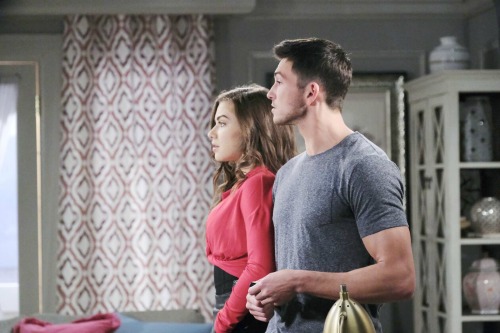 It seems that Claire and Ciara’s fun wedding planning will come to a screeching halt when something horrible happens to Ciara’s chosen wedding gown. Exactly what’s going to happen remains to be seen, but it’s likely that the dress will be defaced or destroyed in some fashion, and of course the first suspect will be Claire. As DOOL viewers know, Ben has been concerned about Claire’s involvement in the wedding from the get-go, and he and Ciara will subsequently quiz Claire about what they think she’s done.

Jake Is Rattled By His Encounter With Vivian

Once Vivian gets apprehended for her stunt at Eli and Lani’s wedding, she’ll get hauled into the Salem PD, and according to the DOOL spring promo, she’ll be absolutely stunned when she encounters Jake there. Well, Vivian’s behavior is going to totally rattle Jake, but why? Will something that Vivian says strike a chord with Jake and perhaps jog his memory for something Stefan-like? Jake will probably initially go into the meeting with Vivian very skeptical, but DOOL spoilers say that he’ll leave in a tizzy. 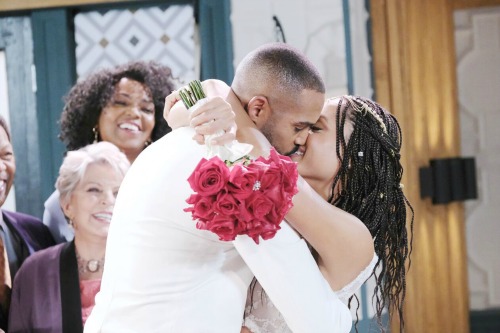 Despite all the wedding disruptions that Eli and Lani will face, they will finally get married, even though Lani’s mom will be feeling under the weather and won’t be present for the nuptials. Yet it seems that Eli and Lani will be feeling determined that nothing is going to get in the way of becoming husband and wife, so viewers will get to see Marlena Evans (Deidre Hall) pronounce them to be married. From there, viewers will get to share in Eli and Lani’s celebration and happiness, and it will be onto the romantic wedding night.

Well, that wraps up our spoiler photos, and it looks like we’re in for an exciting week, so stay tuned! We’ll give you updates as additional DOOL news comes in. Stick with Days of Our Lives and don’t forget to keep CDL bookmarked for the latest DOOL spoilers, daily recaps, and news.