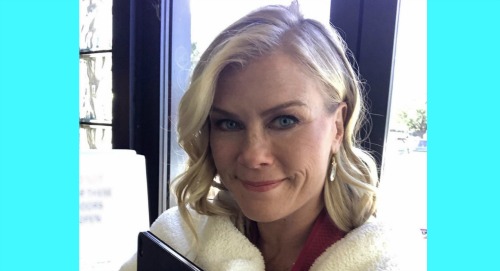 Days of Our Lives (DOOL) spoilers reveal that the cast and crew is finally back at work after a lengthy hiatus. Alison Sweeney (Sami Brady) is one of the DOOL stars who’s reported to set again, so she passed along a couple messages on Instagram. It turns out Sweeney was a bit under the weather, but she didn’t let that stop her from showing up and bringing Sami to life.

“Not feeling well, but still ready to work!” Sweeney said in an Instagram story. She was holding up a tissue box and indeed looked somewhat drained, but it’s nice of Sweeney to power through her apparent cold and do this for fans. It’ll be interesting to see the trouble Sami’s next Days stint brings.

In another Instagram post, Sweeney looked more refreshed. She put up a fun pic, which featured her in a robe that undoubtedly knocked the chill off in the studio.

“Super fun to be back filming at @nbcdays today!” Sweeney said. “Special thanks to awesome wardrobe dept for the cozy robe to keep me warm between scenes. Always fun to be in Salem.”

Days of Our Lives spoilers say it’ll be several months before Sami’s onscreen, but it’s still good to hear from Sweeney and know she’s filming once again. Sweeney confirmed her return on Hallmark Channel’s Home and Family last December and pointed to August as her first airdate back.

Since Sweeney has returned following the hiatus, that means there are even more Sami scenes coming.

Naturally, this makes us wonder what the future holds for EJ DiMera. He was always a popular character when James Scott played him, but the door’s now been left open for a recast. EJ suffered serious burns and was predicted to be unrecognizable upon his recovery.

There’s been no word about an official recast, so it’s doubtful EJ will be joining Sami for this stint. Things like that tend to trickle out through inside sources well in advance. Plus, Days is bringing back Stefan DiMera (Brandon Barash) starting this spring, so they may feel like he’s enough to carry on the ruthless DiMera legacy right now.

However, Sami may have an EJ update to deliver when she hits town. She’ll surely catch up with her loved ones and share how things are going with her family. Let’s hope EJ’s made great strides and is well on his way to living a normal life again. It would fantastic to see Sami and EJ together for a return stint at some point.

Super fun to be back filming at @nbcdays today! Special thanks to awesome wardrobe dept for the cozy robe to keep me warm between scenes. Always fun to be in Salem. #sami #days #monday 📺