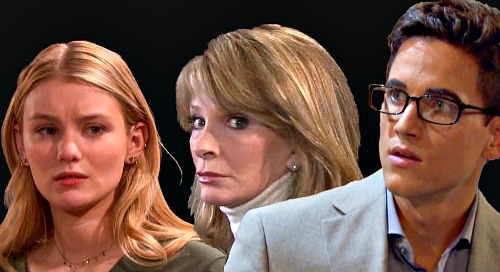 Days of Our Lives (DOOL) spoilers tease that Tripp Dalton (Lucas Adams) should have another meeting with Steve Johnson (Stephen Nichols) soon. Once Steve gets John Black (Drake Hogestyn) on the case with him, they’ll start looking for clues about a mysterious relative of Tripp’s who might be the assault culprit.

Tripp will insist that if someone closely related to him showed up that night, maybe he was the guy who actually attacked Allie.

Of course, Allie will probably think this is yet another way of Tripp twisting the truth around. She may think the notion that Tripp’s relative stalked him back to her apartment and raped her sounds ridiculous.

However, Tripp may remind Allie of all the times he’s stood by his denial. He may even point out that he was confused by Allie’s anger toward him in the beginning.

Tripp will insist it’d explain everything if the other culprit shared DNA with Henry Horton (Jayna and Kinsley Fox) as well and was the real father. Deep down, Allie seemed to question her memories after Steve suggested someone else’s hand could’ve been restraining her.

Once Tripp works to convince Allie, it’ll allow that seed of doubt to grow. Allie will begin to believe she may have accused the wrong man. Days spoilers say Allie will take action as a result, so this storyline will really start to heat up.

It won’t be long until Allie pays Marlena Evans (Deidre Hall) a visit and asks her grandmother to put her under hypnosis. Allie will hope Marlena can bring her true memories of what happened to the surface – and you can bet that’s just what Marlena will do!

DOOL spoilers say Marlena will hypnotize Allie and take her back to that night once again. Allie will share what she sees inside her own head, so this should lead to a memory flood.

At some point, Allie will undoubtedly remember Charlie Dale’s (Mike Manning) face clearly and realize THAT’S where she knows him from. Allie will realize Charlie is the one who attacked her, not Tripp.