Days of Our Lives Spoilers: Ava Rescues Tripp When Allie Holds Him At Gunpoint – Promises To Help Son Prove Innocence 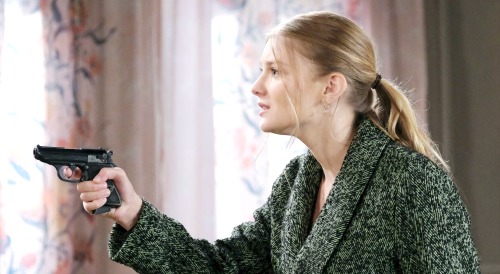 Days of Our Lives (DOOL) spoilers tease that Tripp Dalton (Lucas Adams) is about to get a couple of major surprises. As viewers are aware, Allie Horton (Lindsay Arnold) recently made a decision about whether she was going to pursue rape charges against Tripp in London, where her attack took place.

Allie called Melinda Trask (Tina Huang) to tell her about what she decided, but viewers didn’t hear what Allie’s decision was.

Well, as it will turn out, Allie will have asked Melinda to forward her case onto the London authorities. Unfortunately for Allie, however, the London police will decide not to pursue the case, and this will leave Allie understandably frustrated and angry.

Allie’s just looking for some justice, and it would seem that the DNA test results would have greatly helped her case. Still, Allie will be out of luck. Eventually, Tripp will make his way to Allie’s apartment – perhaps after he finds out that the case isn’t going forward.

While he’s there, Allie will decide to take drastic measures, and Days of Our Lives spoilers say that she’ll hold Tripp at gunpoint in the apartment, threatening to shoot him where it counts, presumably so he can’t attack anyone else!

That’s going to put Tripp on the defensive, and he’ll apparently urge Allie not to shoot him and he’ll maintain that he’s not the one who attacked her. It looks like Tripp will assure Allie that he believes her when she says that she was raped, but he’ll insist that he’s not the man who did it.

Unfortunately for Tripp, Allie won’t be moved, and she’ll continue to threaten Tripp with the gun. 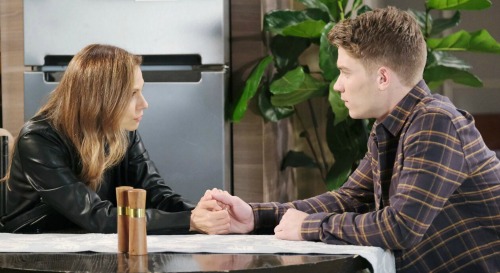 But then something truly spectacular will happen. Days of Our Lives spoilers say that something will interrupt the big stand-off between Tripp and Allie, and since it’s right around this time that Tripp will be reunited with his mom Ava Vitali (Tamara Braun), we wouldn’t be surprised if Ava bursts into the apartment and manages to disarm Allie.

Days of Our Lives spoilers say Ava could even burst into the apartment wielding a gun herself and point it straight at Allie! Knowing Ava, anything’s possible, and Tripp’s going to be amazed and stunned to see his mom standing in front of him in the flesh.

As far as Tripp’s concerned, his mom is dead and gone, so he’s going to have a real moment here. And Allie’s probably going to wonder what the heck is going on.

Well, the disruption is going to save Tripp from getting shot, and Ava may have a few choice words for the woman who’s accusing her son of a horrible crime. Ava will probably let it be known in no uncertain terms that she’s squarely on her son’s side and that she believes him wholeheartedly.

Ava may even promise to help Tripp prove his innocence – she probably won’t be surprised to learn that her nemesis Kayla Brady (Mary Beth Evans) was the one who had the incriminating DNA tests done.

At any rate, it’s going to be an interesting scene there in the apartment with Allie, Tripp, and Ava, if she’s indeed the person who interrupts the situation. Do you think that Ava will be the person who saves Tripp from Allie’s gun?

Stay tuned to the NBC soap and remember to keep CDL bookmarked for all the latest Days of Our Lives spoilers, news, and daily episode recaps.