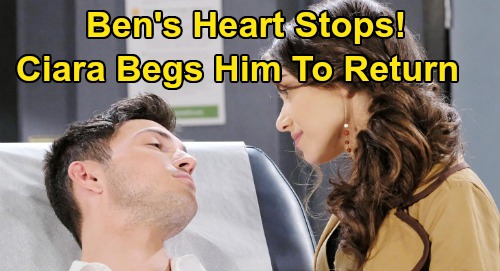 Days of Our Lives (DOOL) spoilers tease that new details are emerging about Ben Weston’s (Robert Scott Wilson) execution, which will bring some heart-stopping moments – literally! Marlena Evans (Deidre Hall) and Will Horton (Chandler Massey) will on hand for Ben’s final moments, but Ciara Brady (Victoria Konefal) will burst in with other plans. She’ll demand that the warden stop this at once.

Ciara will explain that Evan Frears aka Christian Maddox (Brock Kelly) is Jordan Ridgeway’s (Chrishell Stause) true killer. She’ll bring up the DNA evidence and the whole nanny charade, but the warden won’t find any of this very compelling. It’ll just look like Ciara is making a desperate attempt to stall, so the execution will move forward.

Days spoilers say Will and Ciara will take off in hopes of finding Evan. They’ll want to pry a confession out of him and save Ben before it’s too late. While they’re gone, Marlena will push Ben to hang in there. She’ll give Ben a pep talk as the minutes tick down to Ben’s lethal injection doses.

As the end draws near, DOOL fans can expect Ben to reflect on significant moments throughout his relationship with Ciara. He’ll think back on good times and fear he won’t be able to make any more.

Ben considers Ciara his one true love, so it’ll be bittersweet taking this walk down memory lane. He’ll wish he could stick around for another chapter, but he’ll be grateful for the one they had.

Meanwhile, Days of Our Lives spoilers say Will and Ciara will track down Evan. He’ll be in the middle of an armed confrontation with Sonny Kiriakis (Freddie Smith), so Ciara will wrestle Evan’s gun away and bark orders. She’ll force Evan to head back to Statesville with her and stop Ben’s execution immediately.

Just before Ben can receive his third fatal dose, Ciara will barge in again – this time with Evan. She’ll shove Evan’s face against the glass where this execution’s taking place and urge him to see what he’s done. As a result, DOOL spoilers say Evan will cave in and confess to killing Jordan.

Marlena will quickly pipe up in hopes of stopping the third dose. She’ll think the warden should at least wait for more information. Ben’s execution will be called off, but he’ll already be mostly gone.

Days of Our Lives spoilers say Ciara will panic as Ben’s heart stops. She’ll deliver a desperate plea for Ben to come back to her, so expect this storyline’s building to an exciting conclusion!

Thankfully, Ben will survive and score his freedom before long. As other updates and news roll in, be sure to stop by CDL frequently for more Days of Our Lives spoilers.