BY hellodrdavis on May 11, 2020 | Comments: Leave Comments
Related : Days of Our Lives, Soap Opera, Spoiler, Television 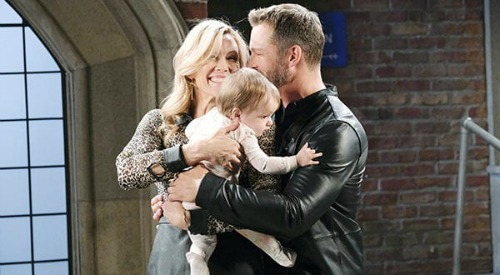 Days of Our Lives (DOOL) spoilers tease that Brady Black (Eric Martsolf) will soon find himself in a real predicament with Kristen DiMera (Stacy Haiduk). As DOOL viewers know, Kristen went berserk and stabbed Victor Kiriakis (John Aniston) after she learned that Victor was behind the kidnapping of her daughter Rachel Black. Kristen was enraged at Victor for masterminding the baby switch that resulted in Sarah Horton (Linsey Godfrey) getting Rachel.

Well, the good news for Kristen and Brady is that they’ll soon have a sweet reunion with baby Rachel in Paris. Kristen will track down Sarah with Rachel in a train station and will eventually convince Sarah to hand the baby over.

Soon thereafter, DOOL spoilers say that Brady will arrive on the scene and he, Kristen, and Rachel will share some nice family moments together.

But because Kristen is a wanted woman back in Salem for Victor’s stabbing, the newly reunited family won’t be able to return home together. That will lead Brady and Kristen to make a really difficult decision – they’ll decide that Kristen will disappear with Rachel, while Brady returns to Salem alone.

It will be excruciating for Brady to be separated from his daughter and Kristen, but the couple just won’t see any other way.

Well, once Brady returns to Salem, he’s going to face a lot of questions about where Kristen is. The Salem PD is going to want to question Kristen in Victor’s stabbing, and Brady will have no choice but to say that he doesn’t know where Kristen went.

That should sufficiently frustrate Rafe Hernandez (Galen Gering) and the other members of the Salem PD, as they’ll want to see justice done.

But there will be someone else who will be livid about the whole situation, and that’s Brady’s brother Eric Brady (Greg Vaughan). Up until very recently, Eric thought that Rachel was his daughter, and he’s apparently not going to be very happy with the idea of Rachel on the run with Kristen.

And when you think about it, Rachel is a baby who has just finished cancer treatment – she’s probably someone who shouldn’t be far from her treating oncologists.

That should sufficiently infuriate Eric, plus he’ll realize that he could potentially never see Rachel again. Eric’s feelings for the little girl will still be strong and paternal, and he’ll blast Brady over what Brady’s done.

Days of Our Lives spoilers say that Eric will let his feelings be known in no uncertain terms – and what’s Brady really going to say here? He won’t be able to deny that he allowed Rachel to disappear with a woman who recently stabbed a man.

It will be truly unfortunate that Eric and Brady won’t be getting along – they’ve worked so hard to overcome their past difficulties and make peace. However, it seems unlikely that Eric will be willing to forgive Brady for letting Rachel be carted off into the wind by the likes of Kristen.

We could be looking at a new period of strain between the brothers for the foreseeable future.

Do you think we’ll see another ongoing rift between Brady and Eric over Kristen’s disappearance with Rachel? Stay tuned to DOOL so you don’t miss any of the action! And keep checking back with CDL – we’ve got all the hot new Days of Our Lives updates just for you.