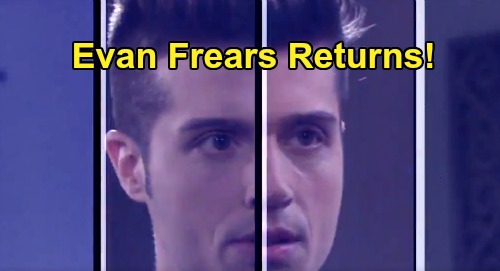 Days of Our Lives (DOOL) spoilers tease that the new DOOL fall preview promo indicates several big returns this autumn, and one of those is Evan Frears aka Christian Maddox (Brock Kelly). As DOOL viewers will remember, Evan is the son of Orpheus (George DelHoyo) and former boyfriend of Sonny Kiriakis (Freddie Smith).

Evan and Sonny got together after Will Horton (Chandler Massey) went to prison for the wrongful death of Adrienne Kiriakis (Judi Evans).

But then it was revealed that Evan was actually Christian Maddox, and that he had murdered Jordan Ridgeway (Chrishell Stause). Evan wound up being convicted of Jordan’s murder, even though his sister Zoey Burge (Alyshia Ochse) gave him a vigorous defense.

Still, the evidence against Evan was overwhelming, and he ended up in Statesville Prison.

Well, the last that viewers saw of Evan was back in May as he was in prison. But now Evan’s coming back, and that leaves several possibilities for how he’ll return. Of course, one option is that Evan will somehow manage to get out of prison.

Soaps sometimes use the “overcrowding” card to get characters released from prison, so that’s always an option. However, since Evan went to prison for a pretty clear-cut murder, it doesn’t seem like prison overcrowding is the answer here.

Perhaps Evan will get out of prison after an appeal on a technicality. Zoey could have been working behind the scenes to get her brother out of prison and reunited with his son all this time, and perhaps her efforts will pay off.

This could get Rafe Hernandez (Galen Gering) involved and back in the picture where David Ridgeway (Kyler Ends) is concerned.

As Days of Our Lives viewers will remember, Rafe finally resigned himself to the fact that Zoey got custody of David, but that was all based on the fact that Evan was safely behind bars for the rest of his life.

If Evan gets out of prison, then Rafe may resume his fight to get David away from Zoey and therefore away from Evan. Rafe will be returning this autumn as well, so it would make sense for Rafe to return upon hearing that Evan’s been released from prison.

Of course, another possibility is that Evan will remain in prison, and that he’ll be joined there by some other DOOL character. Evan could wind up the cellmate of someone else, or he could even become useful in a Salem PD investigation of some sort.

However, since the Days of Our Lives promo showed Evan looking pretty free, this may indicate that Evan will indeed be released from prison this autumn.

At any rate, if Evan’s running around Salem a free man, then that’s going to shake things up for not only Rafe, but for Will and Sonny as well. We should note that the DOOL fall promo indicates that Will and Sonny are set to return to canvas too, and something tells us that they won’t be glad to have Evan back on the Salem scene.

We’ll see what Evan’s return brings! Are you looking forward to Evan being back in Salem? Stick with the NBC soap and don’t forget to check back with CDL frequently for the latest Days of Our Lives spoilers, daily episode recaps, and news.