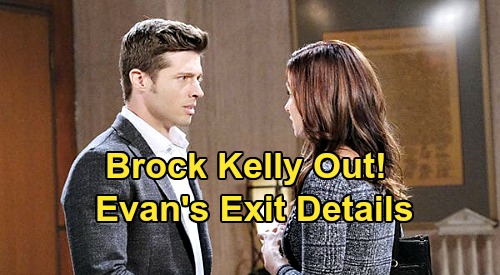 Days of Our Lives (DOOL) spoilers tease that Brock Kelly is set to exit as Evan Frears aka Christian Maddox. On May 21, DOOL fans can watch Evan’s final scenes. It looks like Evan’s headed to prison, but he’ll bid someone farewell before he goes offscreen.

In a new interview with Soap Opera Digest, Brock Kelly opened up about working with Freddie Smith (Sonny Kiriakis). Smith served as Kelly’s main costar at the beginning of his run, so the end of Evan’s story sort of goes back to the start. There may be some moments where Evan finds himself wondering what might’ve been.

For Kelly, it was great having that full-circle experience of working with Smith one last time. “He’s a consummate professional, as I’ve continually said,” Kelly insisted. “He’s given so much to this storyline. It was fitting for me to end it that way, just laying it out on the line.”

Of course, Evan was poised to find love and build a future with Sonny, but his own dark secrets sabotaged that plan. There was also the matter of Will Horton’s (Chandler Massey) name finally being cleared, which gave Will and Sonny a chance to reunite.

Sonny cared about Evan back then, but Will is the love of Sonny’s life. A “WilSon” reunion was inevitable, so it’s just as well that Evan was shady and a little off his rocker! Days made the right call by using Evan to rev up the drama and bring some story twists.

Orpheus (George DelHoyo) and Evan framed Maggie Kiriakis (Suzanne Rogers) for the crash that killed Adrienne Kiriakis (Judi Evans), which is something Sonny and Evan will surely discuss.

The truth will be out at that point, so Sonny may confront Evan about yet another secret. Will wound up going to prison over that crash, so this is one complicated situation!

Sonny and Evan were never going to have a lasting romance, but Evan may still be battling some feelings when he says goodbye. That could be what Kelly was referring to when he discussed laying it all on the line. Evan may apologize for the pain he’s caused and admit he wishes things could’ve been different.

In a perfect world, Evan would’ve liked to raise David Ridgeway (Kyler Ends) with Sonny, but Salem is far from perfect! With that in mind, Evan’s run must conclude.

Days of Our Lives spoilers say Orpheus and Zoey Burge (Alyshia Ochse) will stick around a bit longer, so their wild family isn’t quite done making messes.