Days of Our Lives Spoilers: Ciara Attacks Rafe to Stop Ben’s Arrest – Desperate to Save True Love from Execution 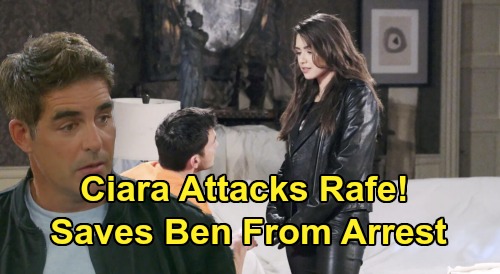 Days of Our Lives (DOOL) spoilers tease that Ciara Brady (Victoria Konefal) will be ride or die for her guy! DOOL fans know so much is on the line for Ben Weston (Robert Scott Wilson) right now. He was set to be executed in less than three weeks, so Ciara felt she had no choice but to help with his escape. She was even willing to work with Ben’s scoundrel of a father, Clyde Weston (James Read).

When it comes down to it, Ciara will do whatever she has to do. She’s determined to keep Ben alive, but that’ll mean doing some desperate things as this storyline heats up. It won’t be long until the news of Ben’s arrest spreads.

However, the Salem PD will be busy with other matters, so Ben and Ciara will be safe at the gatehouse for a while.

After Chad DiMera (Billy Flynn) discovers their presence there, Ciara will likely make a passionate speech about her love for Ben. She knows Ben did some terrible things when he was sick – including some truly terrible things to Chad’s wife, Abigail DiMera (Kate Mansi).

Of course, Abigail has faced her own struggles with mental illness, so she’s done some terrible things as well.

Ciara will probably hope she can appeal to Chad’s love for Abigail and understand that mistakes don’t define someone – especially not mistakes made while someone was ill.

Days of Our Lives spoilers say Chad will likely take pity on Ben and Ciara. It’s doubtful he’ll give the cops updates, but he may offer some advice to “Cin.”

Days spoilers suggest it’d be a good idea for Ben and Ciara to keep moving. The DiMera gatehouse is where Ben used to live, so that seems like the first place the cops would look. It’s surprising that they even made it their hideout in the first place.

Whatever the case, Days of Our Lives spoilers say Ben will indeed be on the move with Ciara this February 21. Sadly, Ciara’s mission to protect Ben will take a troubling turn.

In the park, Rafe Hernandez (Galen Gering) will finally catch up with this fugitive. He’ll start putting handcuffs on Ben as Ciara cries in despair. She’ll feel like she has to find a way to stop this.

Since Ben will be put to death if he winds back up in prison, there’s no line Ciara won’t cross. It looks like Ciara may beat Rafe over the head with something and could possibly steal his gun.

Regardless, Days spoilers say she’ll launch an attack of some sort in hopes of saving Ben’s life. There’ll be more DOOL updates and news as this Days of Our Lives story develops, so you can always stop by CDL for the latest!