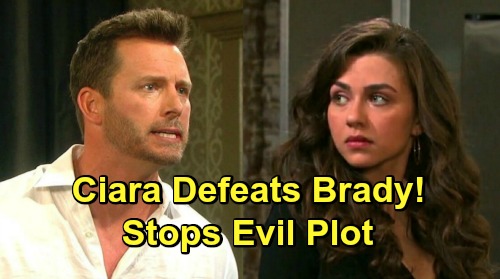 Days of Our Lives (DOOL) spoilers tease that Brady Black (Eric Martsolf) has big plans for his grandfather Victor Kiriakis (John Aniston). As DOOL viewers know, Brady is furious with Victor over the fact that Victor orchestrated the baby switch that left Brady and Kristen DiMera (Stacy Haiduk) thinking that their daughter Rachel Black had died. Brady can’t believe that Victor allowed him to grieve when his daughter was really alive.

Well, now that Brady is back in Salem and Kristen and the baby have traveled to parts unknown, he’s out for some big-time revenge against Victor. Brady has already insisted that Victor fire Xander Kiriakis (Paul Telfer) as CEO of Titan Industries.

Victor complied, and that means Brady is back in the top spot at the family company. But Brady’s not going to stop there.

According to DOOL spoilers, Brady has some very specific plans for Titan – he wants to run the company into the ground and tank the legacy that Victor built.

Brady apparently figures that he’ll hit Victor where it hurts, which is in the pocketbook. Victor is awfully proud of his company’s legacy, and if it were to all be ruined, it would utterly destroy him. That’s exactly what Brady is counting on.

Well, at the same time that Brady is planning on ruining Titan, Ciara Brady (Victoria Konefal) is gearing up to take on a major role in the company. As DOOL viewers will remember, Ciara recently told Victor that she’ll stay on at Titan in her executive role and keep an eye on Xander.

Well, now that Xander’s out as CEO, it looks like Ciara will be working directly with Brady instead.

This could pose a problem for Brady as he sets out to tank Titan. Ciara’s obviously very close with Victor at this point – especially since Victor gave Ciara his blessing on her engagement to Ben Weston (Robert Scott Wilson).

Ciara will of course have no idea that Brady is out to take Titan down, and she’ll probably end up with some serious questions about some of his strategic business moves.

In fact, Ciara could ultimately be Brady’s undoing as CEO. Days of Our Lives spoilers indicate that Ciara and Brady will clash, and we suspect that it will be over Titan business.

Of course, if Brady is making business decisions that don’t seem to make sound business sense, then Ciara could pick up on that pretty quickly and try to run interference,

Ciara could even report back to Victor about what Brady’s up to, which could ultimately make Victor suspicious about Brady’s true motives. One wonders if Brady will have any chance of succeeding in his plot to ruin Titan with Ciara on his heels and continually watching what he’s doing.

Ciara could even end up working for Victor to try to figure out what Brady is up to, and if Victor senses that Brady wants to bring down the company, Victor would probably ruthlessly fire Brady again.

We’ll see what happens from here, but something tells us that Ciara could totally stand in Brady’s way and ruin his revenge plot against Victor. Do you think that Ciara will come through for her grandfather and expose Brady’s mission?

Stick with the NBC soap and check back with us here at CDL for all your latest soap news. We’ve got all your Days of Our Lives updates, spoilers, and daily recaps.