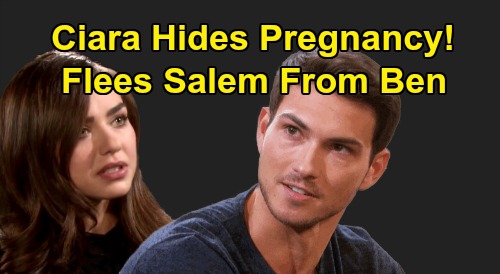 Days of Our Lives (DOOL) spoilers tease that Victoria Konefal (Ciara Brady) is set to exit the NBC soap in the months ahead, which is certainly disappointing for “Cin” fans. Ciara and Ben Weston (Robert Scott Wilson) are madly in love!

They fought obstacle after obstacle until they finally tied the knot, but now Ben’s being held captive and will soon be programmed to kill Ciara.

There’s obviously going to be serious danger since Ben’s got some major killer tendencies anyway. When you combine Ben’s chemical imbalance with Eve Donovan’s (Kassie DePaiva) brainwashing, it’ll add up to real peril.

Ben’s going to have nightmares that could become reality if he’s not careful. Days spoilers say Ben will dream he’s murdering Ciara by strangulation, so that’s terrible news.

However, there could be hope for Ben and Ciara’s future – at least in some form. It seems like Ciara fans are divided about whether they’d want a Ciara recast or not.

Of course, Konefal is a Ciara recast herself, so that’s important to keep in mind. Even so, some people feel like Konefal and Wilson’s onscreen chemistry would be tough to replicate.

On the other hand, a Ciara recast would keep this pairing alive and allow for a new chapter. Days of Our Lives needs to keep the door open for that chapter – whether Konefal returns down the road or a new actress steps in.

There’d be an easy way to do that with Ciara’s upcoming departure. Could Ciara have a big secret when she exits the canvas – one that’d make a great setup for a return?

DOOL fans know there’s always been a lot of talk about Ben and kids. Ben was a loving uncle to David Ridgeway (Kyler Ends) and hoped to have his own children with Ciara one day.

Naturally, there are always going to be concerns about Ben’s genes and what he might pass on. Ben would worry about his kids inheriting his dark side – especially after all of this goes down with Eve.

This ordeal is bound to leave Ben concerned about his own mental well-being. Ben may wonder if he can ever really shake this programming and be a good husband or father.

After Ciara woke up feeling ill on the morning of her wedding, she shut down the idea that she might be pregnant. Sarah Horton (Linsey Godfrey) later confirmed Ciara wasn’t, but Days didn’t have to include that as part of the story.

Why bother mentioning it? Ciara’s non-pregnancy may have been a hint about a real pregnancy that’s still to come.

Ciara will do her best to reconnect with Ben following the Eve chaos. It’s reasonable to assume they’ll make love and try to move on with their lives. It’s only when Ben starts losing his programming battle that the real danger will kick in.

Will Ciara eventually leave town to protect herself – and perhaps an unborn child? Ciara could easily get pregnant during this honeymoon period, which would explain why she’ll apparently be willing to walk away.

Since Ciara normally wouldn’t just give up on Ben, she may need the added incentive of protecting her baby.

That’d be a built-in excuse to bring Ciara back sooner or later. Eve pointed out that Ben didn’t have a daughter, but he does have a wife. Could that have been a clue about the future, too?

Maybe Ben really will end up with a daughter – one that could help him understand Eve’s perspective. What if Ciara returns with Ben’s little girl someday? That sounds like a terrific story!

There’s no guarantee that’s how things will play out, but we should at least consider the possibility that Ciara will hide a pregnancy when she exits. Days of Our Lives has offered enough hints that it’s worth mulling over. As other updates emerge, we’ll deliver the latest details.

DOOL fans won’t want to miss all the shockers and shakeups ahead, so keep watching. CDL’s where you want to be for thrilling Days of Our Lives spoilers, updates and news, so be sure to stop by frequently.