Days of Our Lives Spoilers: Clyde Tries To Save Ben From Himself – Will Dad Get Through To Son Before Terrible Mistake? 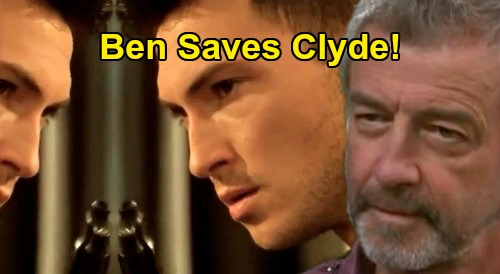 Days of Our Lives (DOOL) spoilers tease that Clyde Weston (James Read) will be back in action during the week of October 19th on the show, and that’s great news for DOOL fans. Anytime Clyde is on the Salem scene is sure to be exciting, and as you might have heard, Clyde and fellow villain Orpheus (George delHoyo) will be making a big escape from prison together.

Clyde and Orpheus will be making their escape during a mini arc that happens during the week of October 19-23, and it’s a situation in which some episodes will be into Days of Our Lives’ schedule to keep the show on track for the holiday episodes that are coming up later this year.

At any rate, Salem is headed for a big black out, and it looks like Clyde and Orpheus will take the opportunity to make their escape from prison then.

Well, all of this will be happening while Ben Weston (Robert Scott Wilson) is going through a major crisis. Ciara Weston (Victoria Konefal) will be presumed dead by that point after some new evidence comes to light at the Salem PD, and Ben’s going to be beside himself with grief and anger.

As viewers know, Ben recently eyeballed a gun that was logged into evidence at the Salem PD, and he remarked to himself that if Ciara’s dead, then he has nothing to lose.

That sounded pretty ominous, as if Ben was planning on taking justice into his own hands and taking out Vincent Bellman (Michael Teh) himself. And the new

DOOL extended promo for the week of October 12 showed Ben with a gun, clearly contemplating putting a permanent end to Vincent. It’s a disturbing thought, with Ben possibly reverting back to his killer persona.

Days of Our Lives spoilers indicate that Clyde and Ben will be meeting up during Clyde’s escape from prison. Clyde may want to go see his boy, whom he knows is crisis over Ciara’s supposed death.

Perhaps Clyde will be able to have some good parenting moments and counsel his son about what he’s planning on doing to Vincent. Last viewers saw Clyde, he really seemed to want the best for Ben, so he may tell Ben that he needs to squash any idea of killing Vincent.

Of course, since this is Clyde that we’re talking about, he might ultimately tell Ben that he’ll take care of the “Vincent problem” himself!

That would be a very “Clyde” move, and since Days of our Lives spoilers say that Clyde will do his best to save Ben from himself, we suspect that Clyde will want to give Ben a good reason why he shouldn’t kill Vincent himself.

We’ll see what happens here, but it looks like we’ll see some good father/son scenes between Clyde and Ben. These two seem to be on decent terms these days, so let’s hope that Clyde can get through to Ben and dissuade him from taking out Vincent himself.

Who knows, Clyde could even argue that Ciara might still be alive despite Vincent’s claims to the contrary, so Clyde could renew Ben’s spark to look for Ciara.

Are you looking forward to seeing Clyde and Ben’s upcoming scenes? And do you think that Clyde will be able to get through to Ben? Stay tuned to the NBC soap and don’t forget to check back with CDL frequently so you don’t miss any of the latest Days of Our Lives spoilers, news, and daily episode recaps.