Days of Our Lives Spoilers: Daniel Jonas Back from the Dead, Shawn Christian Returns – Nicole Stunned by Blast from the Past 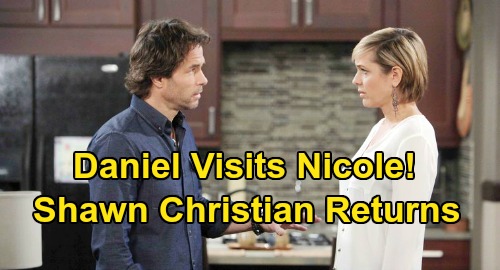 Days of Our Lives (DOOL) spoilers tease that Nicole Walker (Arianne Zucker) is in for a shock during the week of March 30-April 3 – more specifically, April 1. That date will likely be significant, but let’s set the stage. Nicole will hear a knock at the door and answer it to the last person she ever expected to see. There’s a good chance that person isn’t even alive as far as Nicole knows.

However, this is Salem – where people return from the dead constantly. Although Nicole will be floored by what’s ahead, it’s the kind of thing that happens all the time in this town. Will it be Daniel Jonas (Shawn Christian) who shows up on Nicole’s doorstep? Strong DOOL buzz says so!

Days fans will recall that Eric Brady (Greg Vaughan) drove drunk and caused a terrible car accident, which resulted in Daniel’s fatal injuries. Nicole sobbed over Daniel’s body before he was ultimately taken off life support.

Daniel’s heart was given to Brady Black (Eric Martsolf), which set up other stories like Brady’s dreams leading him to Daniel’s sister, Summer Townsend (Marie Wilson).

Of course, Stefan DiMera (Brandon Barash) will make a comeback this spring after supposedly giving his heart to Julie Williams (Susan Seaforth Hayes). There’s no such thing as dead-dead in Salem, but we don’t think Daniel will truly be alive and well. Why? Because this episode will air on April Fools’ Day!

Days of Our Lives sometimes does funny fantasy episodes on certain holidays. DOOL fans will recall all the murder and mayhem that transpired back on Halloween. Jordan Ridgeway (Chrishell Stause) and Claire Brady (Olivia Rose Keegan) wreaked havoc all over town, but it was just a horrible (and hilarious) nightmare.

It seems likely that when Nicole’s blast from the past arrives, it’ll just be part of some fantasy fun. Other surrounding Days of Our Lives spoilers have all the stories moving forward as usual. There’s no place for Daniel in the middle of all this baby swap drama. Plus, there are other Days spoilers for April 1 that point to some possible April Fools’ Day mischief.

Bottom line, you can most likely expect to see Daniel show up out of the blue, but don’t expect it to be real and don’t expect him to stick around. Even so, it sounds like a great April Fools’ Day twist that’s sure to throw Nicole for a loop! We’ll deliver updates as other Days news rolls in. Are you excited about this Daniel Jonas comeback? Stick with CDL for hot Days of Our Lives spoilers, news and updates.