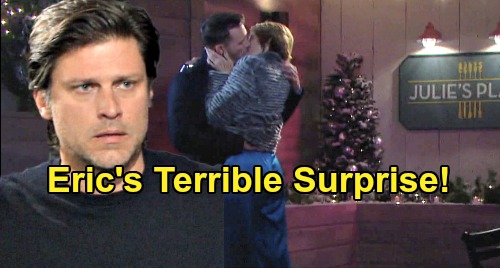 Days of Our Lives (DOOL) spoilers tease that Nicole Walker (Arianne Zucker) will decide to do Brady Black (Eric Martsolf) a favor. DOOL fans know Kristen DiMera (Stacy Haiduk) recently returned to town and made quite a scene outside the New Year’s Eve party. Kristen’s behavior showed Brady that she hasn’t changed at all despite her convent stint.

However, Kristen has a completely different perspective. She reminded Brady that she felt great remorse over Haley Chen’s (Thia Megia) death, but she really went off the rails after losing their child.

Kristen didn’t believe Brady would ever love her the way he did before. She thought Brady was standing by her out of obligation, which led to her decision to leave Salem.

Now Kristen’s back and ready to reunite, so Nicole will worry Brady’s going to get sucked back in. She doesn’t think this reunion is a good idea – and Brady doesn’t either right now.

Of course, how long is that really going to last? This is Brady we’re talking about! He’s proven that he can’t resist Kristen, so Nicole will take steps to keep Kristen away.

Days of Our Lives spoilers say Nicole will pretend she’s in a full-blown relationship with Brady. She’ll hope to convince Kristen that Brady’s moved on, but it won’t be long until Brady’s asked to confirm this.

Since Brady will probably fear he won’t be able to resist temptation otherwise, he’ll decide to go along with Nicole’s deception. Brady will help Nicole sell the lie, which could be somewhat risky.

When it comes to Brady and Nicole, these two always straddle the line of friends and lovers. There’s a deep connection between them, so sometimes it’s hard for them to define the nature of their relationship.

They’ve been able to stick to friendship in the past, but it becomes more difficult when they’re feeling vulnerable – and they both are at the moment. Days spoilers say Brady will be longing for Kristen even more now that she’s back in Salem.

As for Nicole, she’s stuck pining for Eric Brady (Greg Vaughan). Throw in Victor Kiriakis’ (John Aniston) stroke, which will give Brady a reason to lean on Nicole. When you add all this up, it could mean Nicole and Brady’s relationship ruse will start to become real.

Naturally, that could be exactly when Eric will return with Sarah Horton (Linsey Godfrey) and Mackenzie “Mickey” Horton. Mickey will finish her treatment eventually, so what will Eric find when he returns home?

Can you imagine if Eric opens his apartment and sees Nicole all over his brother again? He’ll be furious! If Eric has made any progress toward forgiveness by then, Nicole will end up back at square one.