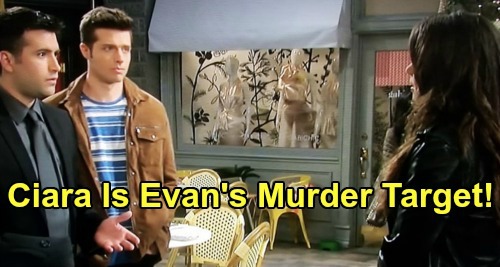 Days of Our Lives (DOOL) spoilers tease that Ciara Brady (Victoria Konefal) could be walking into dangerous territory. Days viewers know Ciara’s been battling guilt over her recent failure. She focused on Victor Kiriakis (John Aniston) and Xander Kiriakis (Paul Telfer) for months, but they were never mixed up in Ben Weston’s (Robert Scott Wilson) drama at all.

However, Days of Our Lives spoilers say Ciara still has a chance to find Jordan Ridgeway’s (Chrishell Stause) true killer. She got off to a nice start during her latest chat with Justin Kiriakis (Wally Kurth) and Kayla Brady (Mary Beth Evans).

After talking things out, Ciara settled on the idea that maybe David Ridgeway’s (Caleb and Kyler Ends) father killed Jordan.

Of course, there have already been clues about David’s nanny, Evan Frears (Brock Kelly), being the kid’s bio dad. The fact that Ciara’s storyline overlaps with Sonny Kiriakis (Freddie Smith) and Will Horton’s (Chandler Massey) story is a hint, too.

Ciara was upset to see Sonny kissing someone else, so Sonny introduced them and seemingly set the next phase of all this in motion.

Now all Ciara needs is some proof – and Evan just so happens to be hiding proof! A background check was required for Evan as part of Rafe Hernandez’s (Galen Gering) efforts to adopt David. Evan panicked over the letter Rafe received afterward, which was to alert him to an issue with that background check.

Although Evan insisted he couldn’t let Rafe see that letter, someone else might. Could Ciara get her hands on the letter somehow? There’ll surely be something to get the wheels turning.

That letter doesn’t prove Evan killed Jordan, but it must prove he’s not the innocent guy he seems to be. All signs point to Evan being David’s father, killing Jordan and letting Ben take the fall for it.

Days of Our Lives spoilers say Ciara’s bound to crack the case eventually. What happens when she does? Evan could easily snap – just like he presumably did with Jordan.

DOOL fans know Jordan was always clear about David’s father being a horrible man. Her view of things could often be twisted, but there must’ve been some truth this time since Jordan’s dead!

Will Ciara’s life also be in danger if she threatens to expose Evan? Will Evan make her a murder target? If there’s one thing Ben won’t tolerate, it’s anyone doing something that might hurt Ciara.

Ben will undoubtedly play a big role in all this after his prison break, so stay tuned. We’ll give you updates as other Days news comes in. Stick with DOOL and don’t forget to check CDL often for the latest Days of Our Lives spoilers, updates and news.