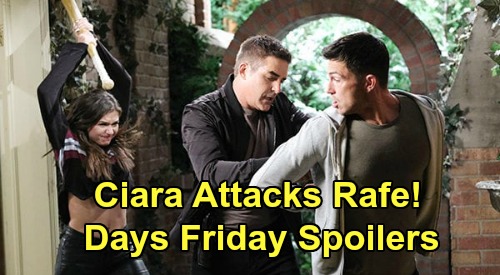 Days of Our Lives (DOOL) spoilers for Friday, February 21, tease that Gabi Hernandez (Camila Banus) won’t have much hope for the future. She’ll feel confident she’s going to prison and will remain there for many years to come.

Gabi will hate the thought of losing her freedom and being separated from her daughter, Arianna Horton (Sydney Brower). She’ll wish there was some way to wiggle out of this awful mess she got herself into. It turns out there is – and it involves Mackenzie “Mickey” Horton.

Eric Brady (Greg Vaughan) and Xander Kiriakis (Paul Telfer) are certainly in for a shock as well. This is quite a twist of fate and it’ll help Gabi once the wheels start turning.

Days spoilers say Gabi will get updates and use this bombshell to her advantage by the time Monday rolls around. She’ll work out a plea deal to trade her freedom for Mickey’s life-saving procedure, so she’ll prove she’s as crafty as ever!

Until then, let’s talk about Maggie Kiriakis’ (Suzanne Rogers) visit to Statesville. She just showed up to chat with Will Horton (Chandler Massey), but she’s confused about why he wanted to see her. Will won’t come right out and make any accusations, but he’ll indeed get Maggie talking about the night of the crash.

Will may suggest he’s seeking closure or will perhaps find some other reason to explain his questions. Regardless, DOOL spoilers say Will will hope to jog Maggie’s memory. He’ll want Maggie will remember the truth herself and spare him from having to spill anything.

Maggie will indeed begin to remember thanks to this meeting, but the memory flashes will grow more intense next week. She’s on the verge realizing she’s behind the crash that killed Adrienne Kiriakis (Judi Evans).

In the meantime, Ciara Brady (Victoria Konefal) will leap into action. Rafe Hernandez (Galen Gering) just showed up at the gatehouse, so he’ll be ready to arrest Ben Weston (Robert Scott Wilson).

Days of Our Lives spoilers say Ciara won’t stand by and let that happen. She’ll grab a baseball bat and smash Rafe in the head with it, which will give Ben a chance to make his getaway. Sadly, Ben won’t get very far. He’ll ultimately be taken into custody on Monday, so this whole escape plot has been a bust.

It sounds like some exciting DOOL scenes are on the way. Days fans will want to stop by CDL for updates as other Days of Our Lives spoilers and news emerge.