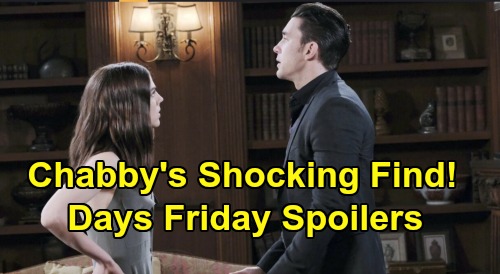 Days of Our Lives (DOOL) spoilers for Friday, January 31, tease that “Steve Johnson” aka Stefano DiMera (Stephen Nichols) will let John Black (Drake Hogestyn) live. Although he’s tempted to just finish John off and be done with him, Stefano has to keep John living and breathing for the sake of his partner in crime.

Princess Gina Von Amberg aka “Hope Brady” (Kristian Alfonso) would turn on Stefano in a heartbeat if she found out John was dead. Of course, Princess Gina was also quite tempted to kill Marlena Evans (Deidre Hall), who now knows exactly who she is.

Instead, Princess Gina tied Marlena to her throne and is making a big deal out of her decision to keep Marlena alive.

Days of Our Lives spoilers say Princess Gina and Stefano will eventually trade places. “Hope” will go to John and inform him that Stefano murdered Marlena while “Steve” goes to Marlena and insists Stefano murdered John. It’ll be a double “death” blow, but thankfully they’ll both remain alive and kicking.

Rafe and Roman will head off to Prague as part of their mission next week, but let’s talk about Chad DiMera (Billy Flynn) and Abigail DiMera (Kate Mansi) in the meantime. Days of Our Lives spoilers say they’ll stumble across a shocker in Friday’s episode.

That’ll probably be “Steve’s” portrait since they’re set to grill Kristen DiMera (Stacy Haiduk) about it in the week ahead. After Chad and Abigail find this portrait, they’ll obviously think it’s pretty bizarre! “Steve” is in the exact same pose as Stefano and happens to be sporting a similar expression as well.

It’ll be clear to Abigail and Chad that this portrait was meant to copy Stefano’s, so they’ll ponder this new mystery. Over with Brady Black (Eric Martsolf), he’ll be surprised and perhaps a bit suspicious thanks to Xander Kiriakis (Paul Telfer).

DOOL spoilers say Xander will deliver a frantic request, so that likely involves Brady getting tested as a potential bone marrow donor.

Mackenzie “Mickey” Horton is actually Brady and Kristen’s daughter, so it’s easy to see why Xander would be hounding Brady about this. As for Eric Brady (Greg Vaughan), he’ll turn to Sarah Horton (Linsey Godfrey) for comfort during a difficult time.

Between sick Mickey and Nicole Walker’s (Arianne Zucker) “reunion” with Brady, Eric will be heartbroken and desperate for someone to lean on.

Days spoilers say Eric will end up kissing Sarah – and it looks like Xander may arrive to see it. He’ll be stunned over their compromising situation on Monday, so showing up to witness the kiss sounds like the perfect Friday cliffhanger.