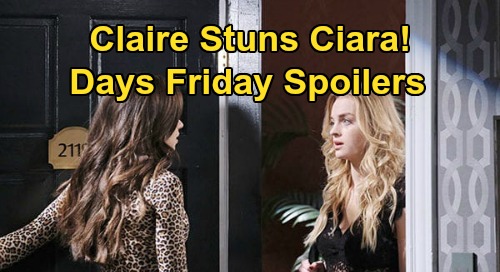 Days of Our Lives (DOOL) spoilers for Friday, June 12, tease that Eric Brady (Greg Vaughan) will have no choice but to let Kate Roberts (Lauren Koslow) and Lucas Horton (Bryan Dattilo) in. They can hear talking inside the problem, and Eric can’t leave them standing out in the hall forever! Once the door’s opened to Lucas and Kate, Allie Horton’s (Lindsay Arnold) sure to get an earful about going MIA.

Of course, Allie’s an adult and can make her own decisions – even if they haven’t proven to be good ones so far! There’ll be plenty of clashing on Friday, especially after Allie delivers a major shocker. That undoubtedly means the baby bomb, so Lucas will be floored when he realizes Allie’s pregnant and has been hiding it for months.

Since it doesn’t look like Sami Brady (Alison Sweeney) will find out about Allie’s bun in the oven until Eric and Nicole Walker’s (Arianne Zucker) wedding day, it sounds like quite a secret circle will form.

Can you imagine how furious Sami will be when she realizes Eric, Nicole, Lucas and Kate all knew before her? DOOL fans can expect Sami to unleash her wrath down the road, particularly when it comes to Nicole.

In the meantime, let’s talk about Xander Kiriakis (Paul Telfer). At the pub, Days of Our Lives spoilers say Xander will want some romantic advice from Jack Deveraux (Matthew Ashford). Xander’s done about everything he knows to do to win Sarah Horton (Linsey Godfrey) back, so it can’t hurt to seek some tips.

Jack raped Kayla Brady (Mary Beth Evans) many years ago, but he’s tried to make amends for that and is now considered a good guy around town. When Jack had amnesia, he also treated Jennifer Deveraux (Melissa Reeves) horribly, so Xander may point out that Jack was able to overcome his mistakes.

However, Jack wouldn’t have hurt Jennifer if he’d been able to remember her. It was a completely different situation all around, but Jack might try to help Xander anyway. Although Jack will probably suggest that Sarah deserves better than Xander, he may provide some words of wisdom that’ll stick.

Other Days of Our Lives spoilers say Ciara Brady (Victoria Konefal) will corner Brady Black (Eric Martsolf) in the square. Ciara’s suspicions are growing, so she’ll wonder what Brady’s true intentions are at Titan Industries. DOOL fans know Brady wants to destroy the company, but he’ll probably pretend all this is above Ciara’s head and urge her to trust his judgment.

Claire’s save-the-date card will surface, which will lead to questions about why Claire has it and why she pretended to be in the dark on the nuptials. A concerned Marlena will wonder if Claire’s really OK with Ciara marrying Ben. Days of Our Lives spoilers say Claire will have to come up with a bogus story, but secrets are her specialty!

Later, Claire will play a trick on Marlena and John – most likely to cover her plan of sneaking out to see Ciara. Days of Our Lives spoilers say Ciara will come face to face with Claire soon enough! There’ll be more news and updates to pass along as all these storylines heat up, so be sure to check back often.

Are you eager to see what “Claire Bear” will do next? Days viewers will see some big twists down the road, so keep watching for more drama. CDL’s the place to be for hot Days of Our Lives spoilers, updates and news posts.