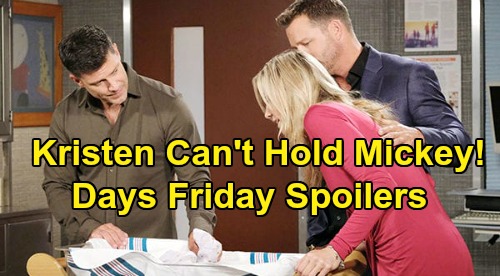 Days of Our Lives (DOOL) spoilers for Friday, March 13, tease that Kristen DiMera (Stacy Haiduk) will have a special request for Eric Brady (Greg Vaughan). DOOL fans know Brady Black (Eric Martsolf) was puzzled when Kristen bolted from Basic Black. They had been reminiscing about Rachel Isabella DiMera Black moments before, but it turns out Kristen felt drawn to the hospital and just had to get over there.

Kristen showed up in the room where Mackenzie “Mickey” Horton is – and that’s where Eric is, too. Since Kristen feels such a strong pull to Mickey, she’ll ask if Eric if he’d be willing to do her a favor. Kristen will want to hold Mickey for a minute, which will make Eric pretty uncomfortable. After all the horrible things Kristen’s done over the years, Eric just won’t be OK with that.

After Eric turns Kristen away, Nicole Walker (Arianne Zucker) will reconvene with Eric and notice the heart-shaped birthmark on Mickey’s neck. She just learned about that birthmark from Brady, so she’ll immediately start flipping out. Once Nicole thinks about all the clues that are coming together, she’ll reach the conclusion that Rachel and Mickey could be the same baby.

Days viewers know Nicole’s right, but she’ll want proof before she spills anything to Eric. Speaking of proof, the evidence against Evan Frears aka Christian Maddox (Brock Kelly) was enough for the charges to hold up, but he still managed to make bail. Days of Our Lives spoilers say Evan will walk out of the Salem PD and head off to find his secret ally.  As CDL reported, that secret ally happens to be his father, Orpheus (George DelHoyo).

Orpheus has apparently been watching David Ridgeway (Caleb and Kyler Ends) while Evan’s been stuck in legal drama. Once Evan meets up with his dad, Days of Our Lives spoilers say they’ll do some plotting. Evan fully intends to keep David and raise him, so he’ll hope Orpheus can pitch in with a plan.

Other Days spoilers say Will Horton (Chandler Massey) and Sonny Kiriakis (Freddie Smith) will take a break from all the Evan chaos. They’ll agree Evan making bail isn’t good news, but there’s nothing they can do about that. Instead, Will and Sonny will make some updates to their relationship status – well, sort of anyway! They’re already married, but this is the perfect opportunity to recommit.

As Sonny and Will enjoy some quiet time in bed together, they’ll exchange rings again and renew their vows. Some great scenes are coming up for “WilSon” fans, so stay tuned. We’ll keep you posted as other DOOL news emerges. CDL’s the place to be for hot Days of Our Lives spoilers and updates.