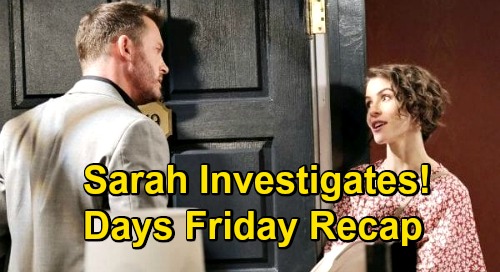 Soon, Justin Kiriakis (Wally Kurth) called to say that he had just met with DA Melinda Trask (Tina Huang) and that she wasn’t going to file criminal charges against Tripp.

However, Justin did say that Tripp could be charged with the crime in London. Tripp asked Steve why he believed his version of events, and Steve said that he knew that Tripp was a good man who wouldn’t victimize a woman. Tripp cried and hugged his dad emotionally.

Over at Nicole Brady’s (Arianne Zucker) apartment, Melinda arrived to tell Allie Horton (Lindsay Arnold) that since the rape occurred in another jurisdiction, she wasn’t going to press criminal charges here, but that she’d send the case to London for prosecution if that’s what Allie wants.

Allie wanted to think about it, and once alone, Allie flashed back to Tripp telling her that he didn’t commit this crime. At the Brady Pub, Lani Price-Grant (Sal Stowers) asked Abe Carver (James Reynolds) and Eli Grant (Lamon Archey) what they were keeping from her.

Eli and Abe said that they were planning a baby shower, and a skeptical Lani said that she didn’t want a shower since Kristen DiMera (Stacy Haiduk) couldn’t be there. Ultimately, Lani agreed to the shower and she left.

A few minutes later, Abe and Eli were back to talking about their big secret when Lani reappeared having “accidentally” left her purse behind.

Lani retrieved her purse and went outside the pub, where she whipped out her phone and played back a secret recording that she had made of Abe and Eli talking about Brady Black (Eric Martsolf) and a secret.

At Julie’s Place, Xander Kiriakis (Paul Telfer) told Sarah Horton (Linsey Godfrey) that he thought Brady was the person working with Philip Kiriakis (Jay Kenneth Johnson) behind his back.

Xander wanted to go confront Brady, but Sarah said that she’d go talk with Brady and find out if he was Philip’s secret partner.

Sarah showed up at Brady’s room at the Salem Inn and quickly learned that Brady had no interest in what happened at Titan. Brady was pretty compelling, and Sarah believed that he wasn’t Philip’s mystery partner.

Suddenly, Rachel Black cried, and Sarah was affected by the baby that she used to raise. Brady said that Sarah could come by anytime to see Rachel.

Later, Lani showed up at Brady’s door at the Salem Inn. “I need you to tell me exactly what Eli doesn’t want me to know,” Lani said.

In the park, Philip was confronted by Ava Vitali (Tamara Braun), and he blustered about her not needing to be there and how he was doing the best he could to launder mob money through Titan Industries.

Ava and Philip bickered about Xander, and about how Philip had run up a huge gambling debt through the Vitali organization.

Ava said that she was there to make sure that Philip delivered on his promise to secure Titan as a money laundering place. Philip said that Ava shouldn’t be in Salem, since she’s supposed to be dead and since she’d be wanted for crimes if it were discovered that she was alive.

Ava strongly insinuated that Philip should “take care of” Xander.

After Philip left, Ava talked on the phone with someone from her organization saying that she was keeping Philip in line. Ava then gazed at a picture of Steve on her phone and flashed back to being intimate with Steve in the past.

In town square, Tripp encountered Melinda and promptly offered his condolences about Haley Chen’s (Thia Megia) death. Tripp then thanked Melinda for dropping the rape charges against him, but Melinda said that she had no choice and that Tripp shouldn’t thank her.

Through their conversation, Tripp learned that Allie was thinking about whether to have the case filed in London.

At the Kiriakis mansion, Philip fantasized about walloping Xander over the head with a fireplace poker. Xander, who was seated in the living room, snapped Philip out of his daydream just as Sarah walked in.

Philip took off, and Sarah shared that Brady isn’t the person in cahoots with Philip. Xander openly wondered who Philip was working with.

Back at Nicole’s apartment, Tripp arrived at the door. “I heard you might still tell your story to the London police,” Tripp said to Allie. “I’m here to ask you not to.”

Finally, back at Steve and Kayla’s place, Ava approached the door from the outside while Steve was inside cleaning up his breakfast dishes. Ava knocked on the door.