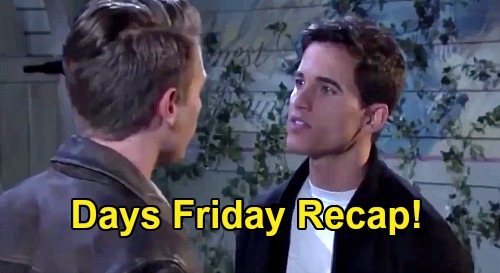 Sarah had a nice dinner prepared for her and Xander Kirkiakis (Paul Telfer), but Xander texted that he was running late and wouldn’t make it. Sarah invited Philip to join her for dinner, and Philip took the opportunity to get in some digs in against Xander.

Sarah asked if Philip would try to get along with Xander, and Philip said that he would. After their dinner together, Sarah and Philip were in the living room talking, and Philip talked about being lonely.

Sarah said that any woman would be lucky to have Philip, and she put her hand on Philip’s arm. Just then, Xander came in blustering and roughed up Philip, spilling wine all over Sarah. Sarah left the room upset with Xander. Philip told himself, “That worked like a charm.”

Up in the bedroom, Xander apologized to Sarah but said that Philip had some sort of agenda. Back down in the living room, Philip talked to a mystery person via phone, saying that he pushed Xander’s buttons and that it was almost too easy.

“I just have to keep poking, and Xander will eventually do something really stupid, then father will fire him once and for all,” Philip said.

John raged at Tripp over what he did to Allie Horton (Lindsay Arnold), and Steve defended Tripp, much to John’s horror. Just then, Marlena Evans (Deidre Hall) and Kayla walked in, and Marlena was astonished to hear that John had hit Tripp.

John couldn’t control his anger and yelled that Kayla of all people should understand because she’s been where Allie is now. Marlena was mortified by John’s outburst, and she got John out of there pronto.

Afterwards, Kayla told Tripp that there was an easy way to solve this – with a DNA test. Tripp got peeved, thinking that Kayla didn’t trust him. Kayla explained that a DNA test could easily clear Tripp, but Tripp refused and left in a huff.

Steve then got Tripp’s toothbrush and gave it to Kayla, asking her to do a secret DNA test. “You wanted a DNA sample. Here it is,” Steve said. “Just get some DNA from the baby. I want you to clear Tripp once and for all.” Kayla looked stunned yet interested in clearing the matter up.

At the hospital, Marlena and John regrouped in John’s room and talked about what had just happened. John was unrepentant for hitting Tripp, but Marlena said that fighting doesn’t solve anything.

John refused to believe that Allie could be mistaken, and he couldn’t understand why Steve was standing behind his son. Marlena hoped that they could calmly discuss this at home.

Off-screen, Claire told Charlie about the allegation against Tripp, and then Tripp walked up to talk with Claire. Charlie popped up and stood between Tripp and Claire.

Claire said that she had nothing to say to Tripp, and that he wasn’t welcome at Ciara’s memorial tomorrow. Charlie got in Tripp’s face, saying to stay away from Claire. “This isn’t your business,” Tripp said. “I’m making it my business,” Charlie fumed.

Eventually Tripp took off, and Charlie and Claire parted, hoping to see each other later.

At Nicole Brady’s (Arianne Zucker) apartment, Nicole wondered if Allie was avoiding Henry Horton (Kinsley and Jayna Fox). At first, Allie got upset, but then she told Nicole that she had been having disturbing thoughts about him.

Nicole queried, and Allie said that she wondered why she didn’t have an abortion, and she described how she went into denial mode and was ashamed during the pregnancy.

Nicole wondered whether some part of Allie wanted to have the baby, and Allie said maybe, but that she wasn’t prepared to raise him. Allie confessed that ever since she remembered the rape, she can hardly look at Henry.

Nicole comforted Allie, saying that with love and support she’d learn to separate Henry from how he came to be.

Soon, Kayla appeared at the door saying that she needed something from Henry. Off-screen, Kayla explained about the DNA test, and Allie readily agreed, saying that she wanted the truth to come out asap.

Back at Steve and Kayla’s place, Tripp returned, upset because he thought that Kayla didn’t believe in him. Steve said that it was difficult for Kayla, and Tripp noted that Steve was the only one who believed in him. When Tripp left the room, Steve looked at Tripp’s toothbrush and sighed.

That was a great episode of Days of Our Lives, and it was an exciting way to round out the week! Stay tuned to the NBC soap and remember to check back with CDL often so you don’t miss Amy of the latest Days of Our Lives spoilers, news, and daily episode recaps.