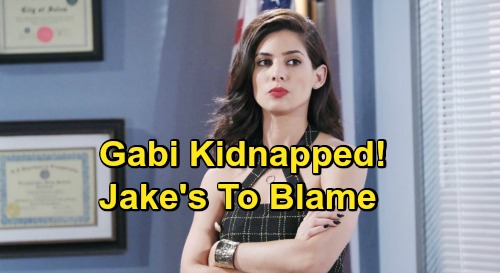 Days of Our Lives (DOOL) spoilers tease that Jake Lambert’s (Brandon Barash) problems will soon become Gabi DiMera’s (Camila Banus) problems, too. DOOL fans know Jake’s got some thugs breathing down his neck about “it.” They left Ben Weston (Robert Scott Wilson) beaten and unconscious at the garage, so this boss of theirs means business!

Jake made a phone call later and pushed someone to call off the goons. He got the message and insisted he was doing the best he could. However, it’s obvious Jake hasn’t been able to deliver on something this mysterious boss wants. The longer Jake takes, the greater the risk to the people caught up in his storyline.

Ben has already landed in danger and more danger’s still to come. Days of Our Lives spoilers say Ciara Brady (Victoria Konefal) will come to Ben’s rescue during the week of May 25-29. Perhaps Ciara will save Ben from another attack and grow increasingly concerned about what Jake’s up against.

Gabi will stick to Jake like glue as usual over the next couple weeks, so she’ll also wind up in trouble. After Gabi gets out on bail, she’ll return to the garage with the real serum and give Jake a dose by force.

Days spoilers say Jake will continue to shove Gabi away, but she’ll be convinced that Jake can unlock Stefan DiMera’s (Brandon Barash) memories.

Whether that’s true or not, Jake’s got major issues to contend with. Unfortunately, Gabi will get stuck in some dangerous drama when she’s kidnapped! It sounds like those thugs will realize or assume Gabi must be important to Jake.

To raise the stakes and get Jake to hand over what he’s promised, Gabi will presumably be held hostage until there can be an exchange.

Of course, a rescue could happen instead of a trade, but the point is Gabi will be snatched and it’ll apparently be Jake’s fault! Days of Our Lives spoilers say Jake will freak before spilling the kidnapping news to Ben and Ciara, who should be worried as well. They may not be Gabi’s biggest fans, but they’ll certainly want her safe return.

We’ll offer updates as other DOOL details emerge. Days spoilers say some shockers and shakeups are looming, so keep watching. CDL’s your one-stop source for entertaining Days of Our Lives spoilers, news and updates.