Days of Our Lives Spoilers: Judi Evans Return – Bonnie Poses as Adrienne, Justin Thinks True Love Back from the Dead? 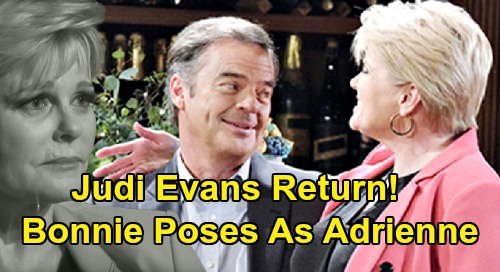 Days of Our Lives (DOOL) spoilers reveal that Judi Evans is set to make an onscreen comeback, but there’s still no official confirmation on who she’ll be playing. However, there are some important hints to consider as we prepare for Evans’ return as Bonnie Lockhart, Adrienne Kiriakis or both.

After DOOL Head Writer Ron Carlivati decided to kill off Adrienne, he talked to Soap Opera Digest about sacrificing the character for the sake of the story. Carlivati also brought up how Bonnie could still return and allow Evans to remain part of the show. That could indicate that Carlivati already had some ideas in mind for Bonnie’s comeback.

Days buzz suggests that Bonnie will indeed return – although that doesn’t mean Adrienne can’t come back as well. Bonnie’s return stint would actually be a great way to build to the revelation that Adrienne’s alive.

We should also note that Days of Our Lives tends to repeat a lot of the same story elements. Brady Black (Eric Martsolf) faked a romance with Nicole Walker (Arianne Zucker) and now he’s faking one with Sarah Horton (Linsey Godfrey).

Since that’s how Days rolls, they might take a familiar route with Bonnie’s return. Remember how overjoyed Eric Brady (Greg Vaughan) was when Nicole came back from the dead, but she turned out to be Kristen DiMera (Stacy Haiduk)?

Bonnie doesn’t even need the mask! She’s played the part before, so she knows how to pass herself off as Adrienne – at least for a while.

Bonnie’s timing would be perfect since Jake Lambert (Brandon Barash) is likely Stefan DiMera (Brandon Barash). If Stefan – a man who was supposedly brain dead and had his heart taken out – can miraculously live, then Bonnie could sell her own story of survival as “Adrienne.”

Bonnie might even fake amnesia, which would make it less likely that she’d trip herself up.

After all, what purpose does Hattie Adams (Deidre Hall) serve whenever she returns? Hattie always poses Marlena at some point. There’s pretty much no way Bonnie will appear without posing as her own lookalike. Why else bring would they bother bringing Bonnie back?

It’s easy to imagine Justin Kiriakis (Wally Kurth) getting duped since he’d be so desperate to believe Adrienne had come back to him. As for Bonnie’s motive, maybe she’s already blown through the money from her memoir. Bonnie might be looking for some quick Kiriakis cash!

Regardless, this kind of story could set Justin up for heartbreak, but it could also lead to the discovery of the real Adrienne. That’s what happened after Kristen was unmasked. Eric still got the “Ericole” reunion he was dreaming of, so perhaps Justin still has a shot at reuniting with Adrienne, too.