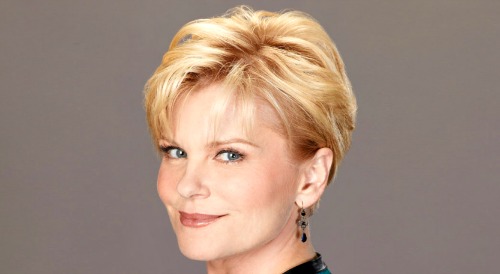 Days of Our Lives (DOOL) spoilers has some troubling news to pass on about a popular DOOL star. Judi Evans, who portrays Adrienne Kiriakis and Bonnie Lockhart on the NBC soap, is having a serious health complication. This comes after Judi took a terrible fall from her horse on Saturday, May 16th.

As CDL previously reported, Judi landed in the hospital with several serious injuries after the fall. Her collarbone was broken, and she suffered two chipped vertebrae. Judi also had seven broken ribs and a collapsed lung as a result of the fall. Judi has been hospitalized ever since, and she’s currently on the mend and receiving a lot of love from her soap fans and colleagues.

Well, a rep for Judi has subsequently reported that Judi has another serious health concern in addition to her injuries sustained by the fall. The rep updated fans on Facebook that Judi’s medical team found a blood clot, or pulmonary embolism, in her lung. This is a very serious condition that can result in sudden death, so it’s something that will need to be watched carefully and is generally treated with blood thinners.

Judi’s rep wrote: “Doctors found a blood clot in Judi’s right lung, not associated with her horse-riding accident. You can’t help but love the daytime community as her colleagues and fans have shown her and her husband Michael an unbelievable amount of support the last 6 months.”

The rep continued: “It really is an extended family in that industry. She is hoping to be out of the hospital sometime this weekend. This lady is a trooper.”

Judi spoke with Soap Opera Digest, saying: “I’m grateful for all the prayers and support from family, friends, colleagues, and for my horse, which probably ended up saving my life! I miss my husband Michael, who I haven’t seen in a week because of the COVID-19 restrictions in the hospital.”

We wish Judi all the best as she recovers from both her fall and from the pulmonary embolism. As you may know Judi has returned to DOOL in either the role of Adrienne or Bonnie (or both!), so we can all look forward to that down the road. Days of Our Lives tapes months in advance, so many of Judi’s scenes have already been filmed.

Given that taping for DOOL is suspended at the present time due to the coronavirus shutdown, Judi will be continuing her recuperation while the show is on hiatus. We hope that Judi’s recovery is steady and strong, and that she’s back to work as soon as the show’s back up and running. Stay tuned to Days of Our Lives and keep CDL at the ready for all the latest DOOL daily recaps, news, and sizzling spoilers.