Days of Our Lives Spoilers: Kristen Baby Death Story Revealed – How John and Marlena Fit In, What Really Happened on Mother’s Day 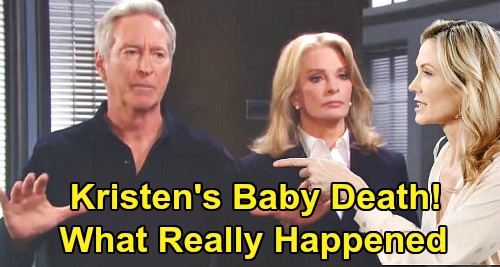 Days of Our Lives (DOOL) spoilers tease that we’ll see what led to the death of Kristen DiMera’s (Stacy Haiduk) baby. DOOL viewers know Kristen was devastated after she lost her little girl. Brady Black (Eric Martsolf) tried to stand by her, but Kristen felt like their bond was shattered forever. She didn’t want Brady to stay with her out of pity or obligation, which led to her stint at the convent in Italy.

Kristen has changed her tune now and intends to get Brady back, but let’s focus on the night their child died. Days of Our Lives spoilers say some exciting flashback episodes are coming up.

During the week of January 20-24, five special shows will feature some missing time jump drama. DOOL will take us back to Mother’s Day and show us exactly what went down for many major characters.

For starters, we should talk about what seemingly sent Kristen into labor. In the flashback scenes, Days spoilers say Brady takes Kristen over to John Black (Drake Hogestyn) and Marlena Evans’ (Deidre Hall) townhouse. Brady views Marlena as his mother figure, so he wants to spend some time with her on Mother’s Day.

Of course, Brady also hopes to mend fences a bit in preparation for the baby. At this point in the story, Brady had accepted his feelings for Kristen and was excited about building a family together. That’s why in the flashbacks, Brady brings Kristen along and hopes maybe “Jarlena” can accept their relationship.

Naturally, that’s a tall order considering all the horrible history that’s gone down over the years. Kristen, Marlena and John have had many twisted battles – and Kristen’s mostly to blame for the constant mayhem.

As a result, Days of Our Lives spoilers say we’ll see the tension erupt at the townhouse. Kristen likely goes into labor after getting stressed over a fierce argument. From there, Kristen lands at the hospital, and things are going pretty well until a complication hits.

It leaves Kristen fearful about her baby’s survival. Later, Kristen’s world falls apart after Haley Chen (Thia Megia) delivers the devastating news of her daughter’s demise. Days of Our Lives spoilers say Kristen flies off the handle and accidentally kills Haley by shoving her down a flight of stairs.

All of that plays out in these flashbacks, but there could be one crucial puzzle piece missing – and that’s a baby swap! There’s a good chance Kristen’s kid was swapped with Sarah Horton’s (Linsey Godfrey), who also gave birth that awful night.

Days may not put that shocker onscreen just yet, but it sounds like it’s coming eventually.

DOOL fans won’t want to miss all the twists and turns in these time jump revelation episodes. We’ll give you updates as other Days news emerges. Stay tuned to DOOL and don’t forget to check CDL often for the latest Days of Our Lives spoilers, updates and news.