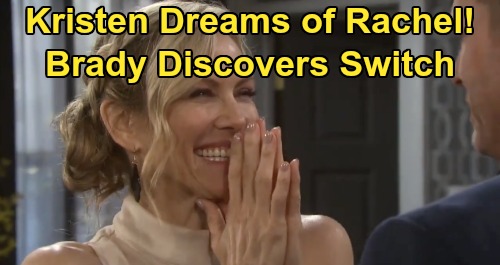 Days of Our Lives (DOOL) spoilers tease that Kristen DiMera (Stacy Haiduk) will remain heartbroken over the death of her daughter. Kristen recently visited her little girl’s grave along with Brady Black (Eric Martsolf). They reflected on the loss of Rachel Isabella DiMera Black and sought comfort in the shared experience.

Of course, Brady and Kristen don’t realize Rachel was swapped on that fateful night. Victor Kiriakis (John Aniston) had no intention of letting Maggie Kiriakis (Suzanne Rogers) find out she killed her own grandchild.

Xander Kiriakis (Paul Telfer) ultimately took Rachel to Sarah Horton (Linsey Godfrey) and passed her off as Mackenzie “Mickey” Horton, so Brady and Kristen were crushed.

Days of Our Lives spoilers say Kristen will remain in the dark on the switch, but something unusual will happen. DOOL fans can expect some vivid dreams for Kristen during February sweeps. Kristen will be taken aback as Rachel seemingly calls out to her in these dreams. She’ll feel like Rachel’s trying to tell her something…like Rachel needs her mom…

Kristen will struggle since she fully believes Rachel’s gone forever. Salem’s a town where people return from the dead all the time, but it’s different when you’ve seen your baby lifeless in the hospital.

Kristen has no reason to think that baby was anyone else’s but her own. Part of Kristen may believe she’s just so haunted by losing Rachel that it’s manifesting in her dreams this way.

However, there’s obviously more to it than that. Days of Our Lives spoilers say we’ll see a battle between Kristen’s head and her heart. Her head’s telling her Rachel is deceased, but her heart won’t be so sure!

Brady may be concerned if Kristen shares the news of these dreams and poses the possibility of Rachel’s survival. He may think Kristen’s losing it, but then again, Brady’s heart has led him to the truth before.

Days viewers will recall Brady had his own vivid dreams following his heart transplant. Daniel Jonas (Shawn Christian) seemingly led Brady to Summer Townsend (Marie Wilson), who was pulled from the ocean.

Rachel isn’t dead like Daniel, but this is still a similar idea. Kristen will face some dreams that point her in the right direction.

Fortunately, Brady should be on the verge of proving Kristen’s gut feeling. Some shockers will put Brady on the path to the truth as well, so this storyline’s really heating up!

We’ll give you updates as other Days details emerge. Stay tuned to DOOL and don’t forget to check CDL often for the latest Days of Our Lives spoilers, updates and news.