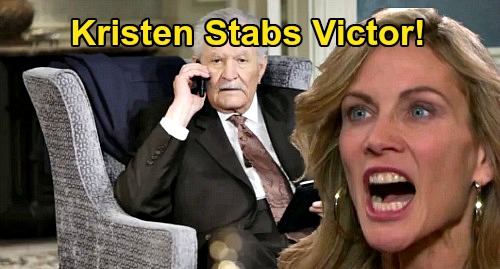 Days of Our Lives (DOOL) spoilers tease that Kristen DiMera (Stacy Haiduk) will make a vengeful move as the baby swap aftermath continues. Many DOOL fans have been complaining that Kristen’s been a bit too nice lately. There has to be a balance between a full-blown baddie and this Saint Kristen we’ve been seeing. Seriously, Kristen and Marlena Evans (Deidre Hall) should NOT get along!

Now that Kristen knows Rachel DiMera Black is alive, she can snap out of the grief funk she’s been in. Kristen’s going to get a little of her fire back – especially after she gets updates on Victor Kiriakis (John Aniston) role in the plot.

You can bet Kristen will deal with Xander Kiriakis (Paul Telfer) as well, but let’s focus on Victor for now. Kristen will resort to violence as she gets revenge over stolen Rachel.

Days of Our Lives spoilers say Kristen will confront Victor, who probably won’t be all that sorry. As far as Victor’s concerned, Sarah Horton (Linsey Godfrey) would’ve been a far better mother to this baby.

There’s a good chance Victor will be his usual curmudgeonly self and make matters worse. Regardless, Days of Our Lives spoilers say Kristen will decide she’s had enough! She’ll be armed and ready when she faces off with Victor, so things will take a dangerous turn.

DOOL viewers can expect Kristen to whip out a knife and stab Victor! Kristen will leave Victor bleeding out in the Kiriakis living room, so this storyline is definitely heating up. It turns out Kristen will just abandon dying Victor, but he’ll thankfully be found soon and rushed to the hospital for treatment.

Of course, this ruthless step is awfully extreme, but it’s also a very Kristen-like thing to do – at least if we look at the old Kristen’s pattern of behavior. Days spoilers state that Kristen won’t care about the consequences in that moment. She’ll just want bloody vengeance, so she’ll take it right then and there.

Some shocking scenes are ahead on the NBC soap. As other Days news rolls in, we’ll pass along all the latest DOOL details. It sounds like Kristen’s dark side is coming back in a big way. Don’t forget to stop by regularly for terrific Days of Our Lives spoilers, updates and news posts.