Days of Our Lives Spoilers: Kristian Alfonso’s Gets a New Job – Lands Role with Alison Sweeney in Hallmark Project

Days of Our Lives (DOOL) spoilers reveal that Kristian Alfonso’s (Hope Brady) final DOOL episode recently aired, but she’s already got a new job! Alfonso offered up some details on her latest gig in an exciting Instagram post. It turns out Alfonso’s taking on a role that’s somewhat familiar – and she’s got a familiar costar, too.

Alfonso plays Sheriff Williams in the Hallmark’s newest installment of their Chronicle Mysteries movie series. If you’re a fan of Chronicle Mysteries, you know that Alison Sweeney (Sami Brady DiMera on Days) has a starring role in them as super snooper Alex McPherson.

Alfonso has plenty of experience playing someone in law enforcement due to her work on Days, so this role should be a piece of cake for her. It’s also great to see Sweeney and Alfonso teaming up for a project on another network.

Hallmark is certainly a hotspot when it comes to soap stars who have left the world of daytime dramas behind. Of course, Sweeney isn’t out of the game entirely. She’ll be headed back on set before 2020 wraps up and will kick off a return stint that’ll last through most of 2021. 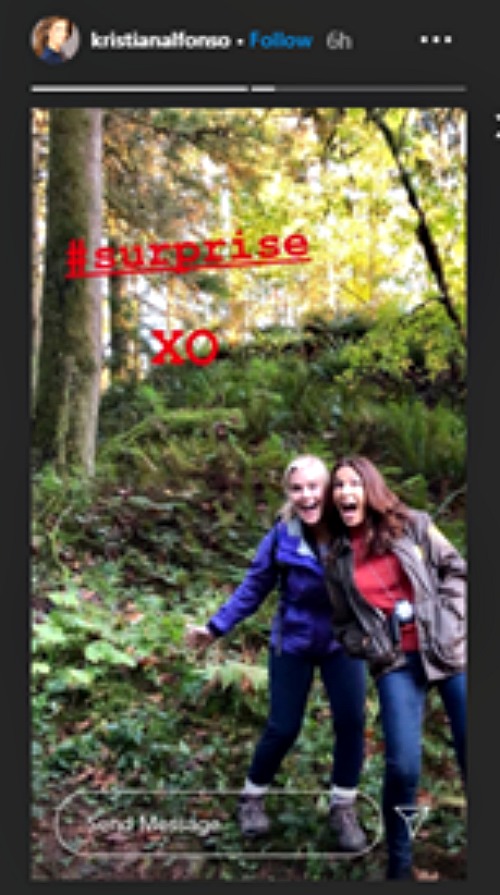 As for Alfonso, she has no plans to return to Days of Our Lives, but we’d say anything is possible down the road! For now, it’s nice to see Alfonso is still acting and will have a chance to continue her career in other ways.

In Alfonso’s Instagram post, she included a fantastic pic on location and seems excited about this new part. In addition to that photo and a little message about what she was shooting, Alfonso put up another pic in an Instagram story. It features Alfonso and Sweeney in the woods for a scene they’ve been filming.

Alfonso posted “#surprise XO” as her caption and has been getting tons of support from loyal Days fans. Casey Moss (JJ Deveraux) and Tracey E. Bregman (Lauren Baldwin on The Young and the Restless) cheered Alfonso on through some emoji comments as well.

As for when this Chronicle Mysteries installment will air, Alfonso stated that she believes it’s set to air in February. She responded to a curious fan, so that gives you an idea of when to expect this fun flick! As other DOOL news comes in, we’ll offer more updates.