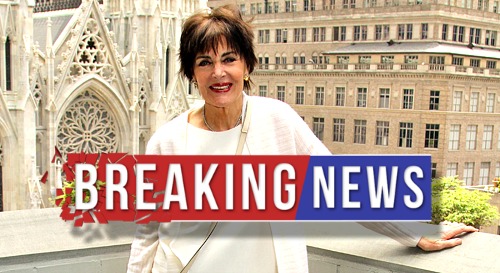 Days of Our Lives (DOOL) spoilers has some news to pass on about an upcoming recast on the NBC soap. Veteran soap actress Linda Dano will be taking over the role of Vivian Alamain in early 2021.

Soap enthusiasts will remember Linda Dano from Another World, where she portrayed Felicia Gallant from 1983-1999. Linda also played the role of Rae Cummings on General Hospital, Port Charles, and All My Children during the 2000s.

The recast of Vivian Alamain on DOOL will be yet another change for the role. Viewers will remember that Louise Sorel returned to the role for a short stint earlier this year, when Vivian allegedly died but it turned out that she faked her death.

Vivian then left Salem with Ivan Marais (Ivan G’Vera). Prior to that, Vivian was portrayed by soap vet Robin Strasser (Dorian Lord, OLTL) briefly in 2019.

Now that Vivian will be back on the scene, that suggests some interesting storyline possibilities. Vivian’s death was faked with the help of Ivan because Vivian was in all sorts of legal trouble for crashing Eli Grant (Lamon Archey) and Lani Price-Grant’s (Sal Stowers) wedding and threatening to kill Lani.

Vivian will need to be careful when she returns, and she may need to keep herself hidden.

But something tells us that Vivian will want to reunite with her son Jake Lambert (Brandon Barash). This will come just as Jake is trying to become an integral part of DiMera Enterprises alongside Chad DiMera (Billy Flynn).

Vivian might want to help her son get what’s rightfully his, but she’ll have to first reveal herself to Jake, which will certainly be a shock to him – not to mention an inconvenience if Jake needs to keep Vivian’s existence a secret.

Well, assuming that Vivian does make her presence known and somehow gets out of her legal problems over Eli and Lani’s wedding, she’s could end up moving into the DiMera mansion with Jake, which would really throw things off in that household.

As Days of Our Lives viewers know, Gwen Rizczech (Emily O’Brien) is manipulating virtually everyone in the mansion, and Vivian could put a stop to it.

Vivian will also reconnect with Kate DiMera (Lauren Koslow), and she could end up living under the same roof as Kate. That could lead to all sorts of conflict, since Vivian and Kate have a tumultuous history.

Last Vivian was in Salem, she and Kate seemed to work through their issues on the surface, but those two tend to always be at each other’s throats!

It will be interesting to see Linda Dano’s take on Vivian this time around. Vivian’s an interesting and complex person, and it will be fun to watch the changes in the character!

Are you looking forward to seeing the new version of Vivian Alamain? Stay tuned to the NBC soap and don’t forget to keep CDL bookmarked for the latest Days of Our Lives spoilers, daily episode recaps, and news.