BY hellodrdavis on January 14, 2020 | Comments: one comment
Related : Days of Our Lives, Soap Opera, Spoiler, Television 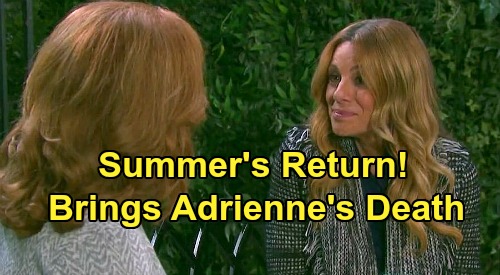 Days of Our Lives (DOOL) spoilers has some exciting news to pass on about an upcoming return to the NBC soap. Marie Wilson, who portrayed Summer Townsend back in 2016, will be reprising her role during the week of January 20-24.

As fans may remember, Summer is Maggie Kiriakis’ (Suzanne Rogers) daughter. Maggie gave Summer up for adoption shortly after her birth.

The last DOOL viewers saw Summer was back I’m 2016, when Summer had apparently kidnapped Tate Black (Colin and Kyle Schroeder). After an altercation with Theresa Donovan (Jen Lilley) during which Theresa fell and hit her head, Summer ran off and out of Salem after saying a sad goodbye to Maggie.

Well, now Summer will turn up again, but she won’t show up in present day. She’ll show up during a “flashback week” that’s set to take place from January 20-24. During that week, many of the big mysteries viewers have been wondering about since the time jump back in November 2019 will finally be answered.

According to Days of Our Lives spoilers, viewers will get answers about what happened to cause Haley Chen’s (Thia Megia) death, as well as the death of Adrienne Kiriakis (Judi Evans).

Will Horton (Chandler Massey) is currently in prison for somehow causing Adrienne’s death, but all signs are pointing to another scenario unfolding.

Specifically, DOOL spoilers indicate that Adrienne’s death may have been caused by Maggie, most likely during a drunk driving incident.

It seems that Victor Kiriakis (John Aniston) and Xander Kiriakis (Paul Telfer) believe that Maggie killed Adrienne, and that they framed Will to take the fall without anyone being the wiser.

Days spoilers indicate that Summer will appear on the episode scheduled to air on Tuesday, January 21 – the same day that that other spoilers say that tragedy will strike Adrienne and that Maggie will get an upsetting visit from someone from her past.

Could a visit from Summer drive Maggie into another drinking episode, which ultimately leads to Adrienne’s death?

We’ll see how it all works out, and how Will gets himself connected to the tragedy of Adrienne’s tragic death. It sure likes like Summer will somehow be involved, and DOOL viewers won’t want to miss the action during the week of January 20-24 for sure!

Do you think Summer will be involved in Adrienne’s death? Stay tuned to DOOL and don’t forget to check CDL often for the latest Days of Our Lives spoilers, updates, and news.