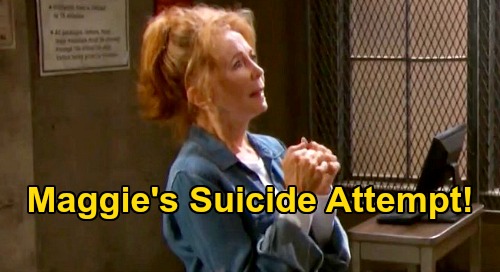 Days of Our Lives (DOOL) spoilers tease Maggie Kiriakis’ (Suzanne Rogers) life will be in danger. DOOL fans know Maggie’s hit rock bottom behind bars. Maggie was already struggling to cope with killing Adrienne Kiriakis (Judi Evans), but the news that she killed her own grandchild really sent her over the edge.

Sadly, it looks like Maggie will do something drastic to end her pain. Before we get to that, we should note that DOOL’s weekly promo confirms Maggie’s innocence. Maggie was drugged and framed on the night of the crash.

Days of Our Lives spoilers say Orpheus (George DelHoyo) and Evan Frears aka Christian Maddox (Brock Kelly) were in on this setup. Of course, there was some confusion after Will Horton (Chandler Massey) entered the mix, which led to Xander Kiriakis (Paul Telfer) and Victor Kiriakis (John Aniston) letting Will take the fall for something he didn’t do.

They were desperate to keep Maggie in the dark. It turns out Maggie’s been blameless the whole time! Unfortunately, Maggie doesn’t realize that yet.

That brings us to the drastic move we mentioned. Days of Our Lives spoilers say something truly shocking will hit the screen during the week of May 18-22 – so shocking that insiders are surprised Days is even going to air it.

Here’s what we know so far. Days of Our Lives spoilers say Xander will race to Statesville on a desperate mission. He’ll be determined to rescue Maggie from a terrible fate!

Soon after Xander arrives, he’ll struggle to revive Maggie. That tells us Maggie will be dying, so Xander will be frantic to save Sarah Horton’s (Linsey Godfrey) mom.

Days hasn’t revealed all the details yet, but it sounds like Maggie will decide to take her own life. The guilt of what Maggie thinks she’s done may be too much for her to bear. That could lead to Maggie calling Xander or Victor Kiriakis (John Aniston) and saying something that seems like one last goodbye.

This could also lead to Xander’s realization that Maggie intends to commit suicide and set up a mad dash to stop her. It might be a little tricky for Maggie to pull this off, but suicides do happen in prison sometimes. The guards are clearly incompetent at Statesville anyway.

After all, Ciara Brady (Victoria Konefal) managed to drag Evan Frears aka Christian Maddox (Brock Kelly) past who knows how many guards while holding him at gunpoint! Regardless, Days of Our Lives spoilers say Xander will come to Maggie’s rescue after this prison incident and revive her in the nick of time.

As other Days news becomes available, we’ll pass along updates. Some bombshells are ahead on the NBC soap, so stay tuned. CDL’s your go-to source for hot Days of Our Lives spoilers, updates and news posts.