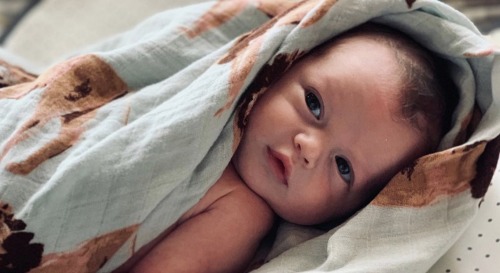 Days of Our Lives (DOOL) spoilers has some great news to pass on about a popular DOOL star. Melissa Reeves, who portrays Jennifer Deveraux on the NBC soap, has become a grandmother for the second time.

You might know that Melissa is married to Scott Reeves, who portrayed Steve Webber on GH from 2009-2013 and Ryan McNeil on Y&R from 1991-2001. Both Melissa and Scott announced the birth on their respective Instagram feeds, along with some adorable pictures of the baby.

The new baby boy is named Woods McClain Smith and was born to the Reeves’ daughter Emily Smith and her husband Nate Smith.

Grandma Melissa shared some adorable photos of Woods, saying the following in her caption: “We are so blessed to say Woods McClain Smith was born July 25!!!! There are no words to explain our joy and gratefulness that the Lord is entrusting this bundle of sweetness to our family.”

Grandpa Scott posted a picture of Woods as well, saying: “I am in utter awe of this precious gift God has entrusted our daughter, @emily.smith.music, and son-in-law, @nate.smith02, with.” Scott also said that his daughter and son-in-law are “already pros at parenthood and we can’t wait to see them grow even more. God has blessed our family abundantly and I don’t take one bit of that for granted…I can’t wait to spoil the daylights out of him.”

Scott concluded by saying: “We are already so in love with him it’s unexplainable. Woods McClain Smith, you have rocked Sweet Mama (@missyreeves) and Papa G’s (me;)) world!”

And Mary Beth Evans (Kayla Brady, DOOL) commented: “What a beauty! Congratulations to all.” Lauren Koslow (Kate DiMera, DOOL) weighed in as well, saying: “Congratulations- so so happy for your family – welcome to the world beautiful Woods!”

Melissa’s and Scott’s fans have been responding as well. One person responded by saying: “Congratulations Scott!! What a doll baby! I know you all are over the moon thrilled! So happy for y’all!” And someone else said: “Look at that hair!! Congratulations on your little miracle!”

Woods is certainly a cutie, and we wish him, his parents, and his grandparents all the best. We send our congratulations to the whole family. Stay tuned to Days of Our Lives and don’t forget to check CDL often for the latest DOOL spoilers, daily episode recaps, and news.