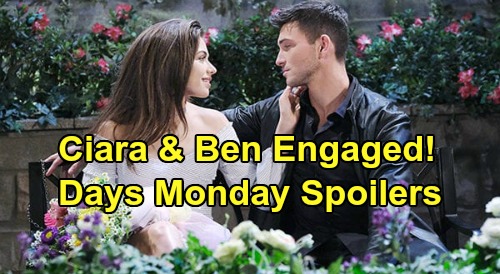 Days of Our Lives (DOOL) spoilers for Monday, May 11, tease that Kristen DiMera (Stacy Haiduk) will head for the train station. She just showed up at that apartment in Paris, but Sarah Horton’s (Linsey Godfrey) already taken off with the baby. Fortunately, Kristen can get the scoop from Rex Brady (Kyle Lowder) and race to stop Sarah before it’s too late.

Before Sarah can board a train for parts unknown, Kristen will show up. A freaked-out Sarah will hold “Mickey” in her arms and insist that Kristen can’t have her daughter back. Sarah will cry and argue that she just can’t part with “Mickey,” but Kristen will shed some tears of her own. She’ll beg Sarah to return Rachel so they can finally be a family.

Days of Our Lives spoilers say Sarah’s panic will turn to rage, so she’ll lash out at Kristen. Since Kristen’s done some pretty terrible things, Sarah will run down the list of why “Mickey’s” better off with her. Sarah will make it clear that Kristen doesn’t deserve to be a mother.

However, Kristen won’t let her temper flare. Days spoilers say Kristen will appeal to Sarah as a mom who’s now lost her biological child. Kristen can understand that pain due to everything she went through when she thought Rachel was dead. 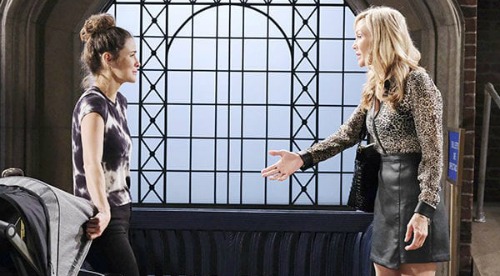 Of course, this situation’s a little different since Sarah has an added layer of sorrow. She’s also losing a second child that she’s actually bonded with. Nevertheless, Days spoilers say Kristen will keep working to win Sarah over and convince her she can be a good mom to Rachel.

Meanwhile, Xander Kiriakis (Paul Telfer) and Brady Black (Eric Martsolf) will clash on their way to find Sarah and Kristen. Xander just boarded the jet and will refuse to get off, so this should be one tense flight! In fact, Days of Our Lives spoilers say Brady and Xander will wind up throwing some punches.

Back in Salem, Jake Lambert (Brandon Barash) will get caught up on all things Stefan DiMera (Brandon Barash). Jake’s already been doing some research, but he’ll get more updates from Kate Roberts (Lauren Koslow) on Monday. If this is truly Jake and not Stefan, Jake will certainly have all the info he needs to pose as the real deal!

Then again, Jake could be Stefan and just have to play dumb. This DOOL mystery is still unraveling, so we’ll see where the story heads next. As for Ben Weston (Robert Scott Wilson) and Ciara Brady (Victoria Konefal), they’ll enjoy a night of romance. Ben will bring Ciara flowers and treat her to some Chinese takeout, so she’ll appreciate how Ben’s recreating their first date.

When Ciara opens her fortune cookie, she’ll read the message inside and discover that Ben’s asking her to marry him. Although Ciara will think this is some kind of joke at first, Ben will insist it’s a legitimate offer. He wants to spend the rest of his life with Ciara, so a resounding “yes” is on the way.

It sounds like some exciting scenes are ahead. As other DOOL details emerge, we’ll deliver the latest news. Days spoilers say Ben’s proposal will bring some sweet moments, so “Cin” fans won’t want to miss all the action. Be sure to stop by CDL frequently for more Days of Our Lives spoilers, updates and news.