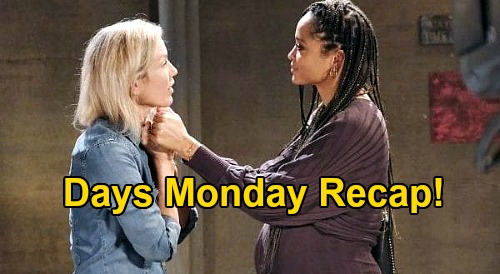 Days of Our Lives (DOOL) spoilers recap for Monday, November 23, reveal that Lani Price-Grant (Sal Stowers) visited with Kristen DiMera (Stacy Haiduk) at the prison. Lani said that she found out that Eli Grant (Lamon Archey) had forced Kristen to sacrifice her freedom, and that she had kicked Eli out of the apartment. “You know he was in an impossible situation,” Kristen argued.

Lani fumed about Eli, saying that if Eli had trusted her to begin with, then Kristen wouldn’t be in prison and separated from her daughter. Kristen urged Lani to forgive El, saying that all the secrets started with her, and that she should have taken responsibility for the stabbing from the get-go.

Kristen virtually insisted that Lani forgive Eli, but Lani said that she didn’t know if she could do it.

At Julie’s Place, Julie Williams (Susan Seaforth Hayes) talked with Eli and Abe Carver (James Reynolds). Julie gushed about the upcoming baby shower, and Eli woefully told her about Lani kicking him out of the apartment and why.

Julie thought that Eli had really messed things up, and she let Eli have it. Eli took off, and Julie started in on Abe for helping Eli to keep the secret. Abe wasn’t having it, and he told Julie to quit piling it on.

Jan told everyone to calm down or else Belle was a dead woman. Jan collected everyone’s phones, while Marlena told John to play along with Jan because she’s mentally unbalanced.

Belle then showed the group a picture of Belle on her phone as proof of life, and Jan told Marlena, John, Brady Black (Eric Martsolf), Shawn Brady (Brandon Beemer), Claire Brady (Isabel Durant), and Charlie Dale (Mike C. Manning) that if anyone got in the way of her perfect wedding, it would be Belle’s funeral.

Claire then pulled Jan aside to say that she was worried about her mom. But Jan stayed singly focused and said that she wanted Claire to be her maid of honor.

Jan thanked Claire for helping her to know that Belle was at the Salem Inn, and Claire was horrified and angry. Marlena intervened to take Jan aside for a private chat about the ceremony.

Charlie comforted Claire, who was very upset over Jan’s betrayal. Claire said that she thought she and Jan were bonding, and Charlie mentioned that they had both been mental patients. Charlie admitted that Xander Kiriakis (Paul Telfer) told him, but that he’d never judge Claire for getting help.

Meanwhile, Marlena tried to talk with Jan across the room, telling her that Shawn was planning to marry Belle today. Jan berated Belle over having cheated on Shawn.

Marlena looked unnerved. Elsewhere in the penthouse, John told Shawn that they needed to placate Jan and have the wedding ceremony as a stall tactic. Shawn looked horrified.

Jan asked Shawn if he was ready for the ceremony, while John and Brady put their heads together and decided that Brady would slip out during the ceremony. Marlena walked up and got in on the plan, and she agreed to stall and drag out the ceremony as much as possible, to give Brady time to get out undetected.

Jan told a horrified Claire that she’d be the best stepmother ever, and Claire played along to placate Jan and string her long. Marlena then called everyone to attention and started in with the ceremony.

Marlena talked slowly, stalling, and going through the part about objections. As Marlena kept talking, Brady neared the door and quietly slipped out. Claire then started with a reading, and Shawn blurted out that he couldn’t do this.

Meanwhile, Brady ran through town square, where he encountered Eli. Brady told Eli that he needed help and that his sister was in the Salem Inn and was in trouble. Eli wanted to call for backup, but Brady said he was going with or without Eli, so the men rushed into the building together.

Back at the penthouse, Shawn reconsidered his objection to the wedding as Jan said that something awful would happen to Belle if he didn’t. Claire finished her reading, and Jan instructed Marlena to call her “Janet,” which was her given name.

Marlena went through the vows, and Shawn said “I do,” then Jan wanted the rings, so everyone turned to find the best man. Jan then realized that Brady was gone.

Finally, over at the Salem Inn, Eli and Brady burst through the door to Belle’s room then looked in the direction of the bed. “Oh my god,” Brady said.

That was a terrific episode of Days of Our Lives, and there’s plenty in store for tomorrow, so stay tuned! Stick with the NBC soap and remember to keep CDL at the ready for the latest Days of Our Lives spoilers, news, and daily episode recaps.