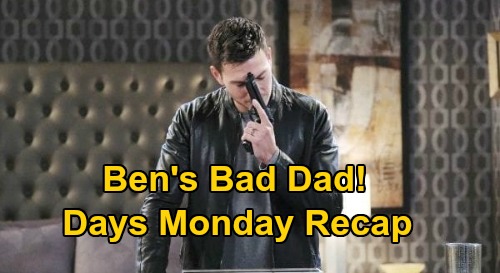 Kayla told Steve, who was at their apartment, that she’ll be home soon, and Steve said that if he could prove that Tripp Dalton (Lucas Adams) was innocent, then maybe Tripp would forgive him for going behind his back.

Just then, Tripp walked into the main area of the apartment and overheard Steve’s words.

Tripp demanded to know what Steve had done, and Steve lied and said that he asked Kayla to put in a good word for him with the medical school, since the school had tabled Tripp’s application due to the rape allegation.

Steve then tried to call Kayla at the hospital, as she still wasn’t home yet, and he decided to go find her.

Kayla was glad about that, but Rolf promised that the Phoenix would rise again…with Kayla’s help.

Kayla assumed that Rolf had a backup microchip, and Rolf said no, but he had something else. Rolf insisted that Kayla go with him somewhere. Rolf and Kayla left, and a short time later, Steve walked into Kayla’s office and noticed her phone sitting on the desk. Steve looked worried.

In the park, Clyde Weston (James Read) called Orpheus (George DelHoyo) to say that he was making his move. “Get it done,” Orpheus instructed.

At Nicole Brady’s (Arianne Zucker) apartment, Nicole and Allie Horton (Lindsay Arnold) sat in the dark with Henry Horton (Jayna and Kinsley Fox) and talked about the fugitives who had escaped. Nicole went to shower, and soon Clyde came to the door and told Allie he was from the power company.

A short while later, the lights came back on in the apartment, and Allie told Nicole about the power guy coming in earlier. Allie checked on Henry, but he was missing from his crib. “Henry’s gone!” Allie wailed. In the park, Clyde sat holding Henry with one hand and drinking booze with the other.

At some warehouse, Marlena Evans (Deidre Hall) sat tied up and talked to Orpheus, trying to figure out what he wanted with her. Orpheus eventually told Marlena that he needed her talents…to get Evan Frears aka Christian Maddox (Brock Kelly) out of Bayview.

As it turned out, Evan was transferred to Bayview after he had a breakdown and tried to kill himself in prison.

Orpheus demanded that Marlena get Evan discharged into her care, and Marlena balked. Orpheus then told Marlena that he had a family member of hers, and off-screen he told her who it was. Marlena was horrified.

“You will follow my instructions to the letter unless you want another death on your hands,” Orpheus said.

At the Salem Inn, Ben Weston (Robert Scott Wilson) got a visit from John Black (Drake Hogestyn) who was looking for Marlena. Ben reported that Marlena hadn’t been there for hours, and John reeled.

Ben then disclosed that he left Marlena a message warning her that Orpheus had escaped, and John was horrified to hear about Orpheus and lashed out in anger at Ben.

Ben got John calmed down, and Ben wanted to call the cops, but John had other ideas. John quizzed Ben about whether Clyde had reached out to him, and whether he knew how to reach Clyde.

Ben said that he didn’t know how to get hold of Clyde, but that he’d give anything to keep Marlena safe, even if it meant that Clyde got caught.

John asked Ben if Clyde had a safe house anywhere, and Ben didn’t know, but he suggested that John call Xander Kiriakis (Paul Telfer), which John did.

John got the location of a warehouse that Clyde used to use, but then John’s head started hurting and he stumbled a bit as he was trying to call a buddy from the ISA. Ben worried about John, but John insisted that he was ok.

Before John left, he hoped that Clyde wouldn’t end up as collateral damage, and Ben replied, “If he’s done anything to Dr. Evans, then he deserves that.” Ben then sat alone with his gun and reeled about his father’s involvement with Orpheus. “

You got me thinking I could actually trust you, Clyde,” Ben said to himself. “But you haven’t changed.”

Ben then recounted how Clyde used to beat him with a belt, but that he was too little to fight back. “Guess what, dad?” Ben said to himself. “I’m not little anymore, so if I find out that you had anything to do with Dr. Evans going missing, I swear to God…”

And with that, Ben threw a glass against the wall in frustration.

Finally, back at the warehouse, John came bursting through the door brandishing a gun, but he didn’t find Marlena there. Instead, John found Orpheus sitting alone. “Hello, John,” Orpheus said calmly.

That was a great episode of Days of Our Lives, and there’s much more coming tomorrow, so stay tuned! We’ll give you further updates as DOOL news comes in. Stick with the NBC soap and don’t forget to check CDL frequently for the latest Days of Our Lives spoilers and news.