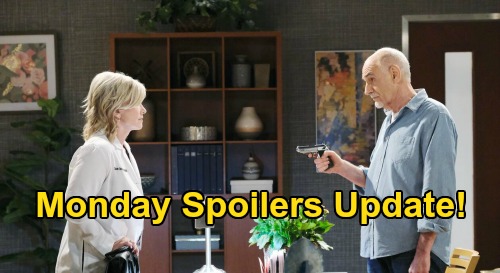 NBC Days of Our Lives (DOOL) spoilers update for Monday, October 26, teases that viewers are in for an action-packed day on the soap, as the three escapees from Statesville wreak havoc on Salem.

Well, Clyde’s going to be successful in his mission of taking the baby, and it won’t be long before Allie and Nicole realize that Henry is gone.

Of course, since there’s a blackout in progress, the Salem PD may take longer than usual to respond, and the whole thing is going to really put Shawn Brady (Brandon Beemer), Lani Price-Grant (Sal Stowers), and Eli Grant (Lamon Archey) on blast.

Meanwhile, Orpheus (George DelHoyo) will reveal his plans for Marlena Evans (Deidre Hall). As Days of Our Lives viewers know, Orpheus has kidnapped Marlena, and Marlena agreed to help Orpheus in order to save John Black (Drake Hogestyn) from harm’s way.

Well, on Monday’s episode, Orpheus will tell Marlena exactly what he wants – and that will be for her to spring Evan Frears aka Christian Maddox (Brock Kelly) from Bayview, where he’s apparently being held.

Marlena won’t be thrilled about any of the, but it looks like she won’t really have a choice in the matter, since John’s well-being will be on the line.

And then it looks like Marlena will learn that Henry has been kidnapped and the only way that Orpheus will allow Allie to get her baby back will be for Marlena to spring Evan. It’s going to be an impossible situation for Marlena, so it looks like she’ll do her best to get Evan released.

While all this is going on, John will make a trip over to Ben Weston’s (Robert Scott Wilson) suite at the Salem Inn to find out where Marlena is.

Last we saw of John on Friday’s episode, he was starting to get worried about Marlena, who was supposedly headed to check on Ben. Well, John’s going to be horrified when he finds out from Ben that Marlena never made it to the Salem Inn.

John may have a freak out moment that’s more intense than usual, thanks to the aftereffects of his aneurysm, and Ben will do his best to reassure John.

Ben will still be dealing with his strong feelings of revenge as well, so it appears that we’ll see Ben continue to hold Vincent Bellman’s (Micheal Teh) gun and talk to himself about how he needs to avenge Ciara Weston’s (Victoria Konefal) death.

Finally, Kayla Brady (Mary Beth Evans) will be accosted by Wilhelm Rolf (William Utay) as she’s at University Hospital. As Days of Our Lives viewers know, Kayla was headed off to the hospital to drop off the DNA samples for Henry and Tripp Dalton (Lucas Adams) when the blackout hit.

Kayla will be horrified to encounter a gun-brandishing Rolf, who will hold her at gunpoint in her office and start to develop a devious plan.

According to Days of Our Lives spoilers, Rolf will eventually tell Kayla that he’s looking for a surrogate to carry a very special embryo – a clone of Stefano DiMera’s (Joseph Mascolo) that he’s been working on.

Days of Our Lives spoilers tell us that’s going to horrify Kayla, and she’ll be even more disturbed when Rolf indicates that he wants her to be that surrogate!

It sounds like a lot of great drama is heating up for Monday’s episode, so stay tuned! We’ll give you updates as more hot news comes in. Stick with the NBC soap and don’t forget to keep CDL at the ready for all the latest Days of Our Lives spoilers, daily episode recaps, and news.