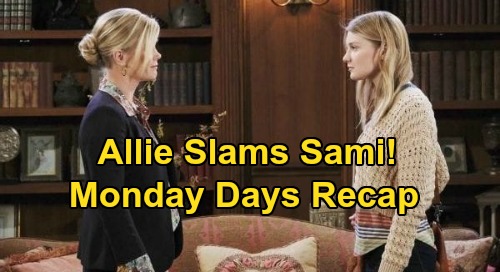 Shawn was displeased, and he was even more upset when he learned about Jan Spears (Heather Lindell) befriending Claire Brady (Isabel Durant).

Philip piped up, saying that he told Jan he’d kill her if she messed with them. Belle and Shawn made Philip go, and they talked about how Claire wanted everyone to forgive Jan the way they forgave her for her own misdeeds.

Belle said she was scared for Claire, since Claire shut her out and let Jan in. Shawn quipped that maybe Philip was right and that maybe they should just let him kill Jan.

At Nicole Brady (Arianne Zucker) and Eric Brady’s (Greg Vaughan) apartment, Nicole told Eric that she knew how important the villagers were to him, and she realized that Eric really wanted to go to Africa to help them.

Eric got upset, saying that he didn’t want to leave Nicole and Holly Jonas (Elin Alexander), but Nicole said that she knew he wanted to go.

After some back and forth about God’s plan and how this could be a sign of what Eric was supposed to do, Eric and Nicole seemed to agree together that Eric should go to Africa for the time being.

Both Nicole and Eric were sad, but they realized that it was what Eric needed to do. Nicole and Eric made love, and Nicole told Eric that she and Holly would be there for him when he returns.

At the hospital, Marlena Evans (Deidre Hall) and Sarah Horton (Linsey Godfrey) talked briefly about John Black’s (Drake Hogestyn) anger outbursts, and then Claire came along to talk with her grandma.

Claire told Marlena about befriending Jan, and Marlena immediately bristled. Marlena tried to tell Claire that Jan was a master manipulator, but Claire thought that Jan deserved a second chance, too. Marlena told Claire to stay away from Jan.

In town square, Xander Kiriakis (Paul Telfer) tried to befriend Jan, but Jan realized pretty quickly that Xander wanted to use her to get to Philip.

Xander insinuated that Jan should report Phillip’s death threat to the police, and just then Sarah walked up and informed Xander about who Jan was and how she tried to kill Victor Kiriakis (John Aniston) back in the day. Xander left his card for Jan as he and Sarah left.

Soon, Claire arrived in the square and saw Jan. Jan apologized for not telling Claire who she was right away, and then she turned on the charm and referred to herself as “crazy,” knowing it would evoke a response from Claire.

Jan thanked Claire for treating her like a human being, and she told Claire that she didn’t need to talk with her anymore if it would cause problems with her parents.

At the Kiriakis mansion, Xander and Sarah arrived, and Sarah told Xander to steer clear of Jan and to find another way to deal with Philip. Sarah went upstairs, and Xander picked out a bottle of wine and then came face to face with Philip as he walked through the door.

Xander was dismayed to hear that Philip was staying at the Kiriakis mansion, and Philip suggested that they share their office space at Titan. Xander looked reluctant.

At the DiMera mansion, Allie Horton (Lindsay Arnold) blasted Sami Brady (Alison Sweeney) for finagling custody of her son and for disregarding her wishes.

Allie said that at least Nicole and Eric listened to her and made her feel whole. Sami said that she had legal custody of the baby now, and that Allie was using the baby to hurt her by trying to give him to Nicole.

Sami tried to get Allie to come to Rome with her and the baby, but Allie refused. Allie then said that she was going to go to the judge in the morning, and that Sami shouldn’t even think about getting on a plane with her son. Allie stormed out, and Sami sighed.

That was a great episode of Days of Our Lives, and more is coming tomorrow, so stay tuned! Stick with the NBC soap and be sure to keep CDL at the ready for the latest Days of Our Lives spoilers, daily episode recaps, and news.