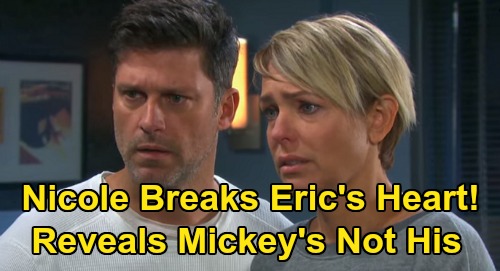 Days of Our Lives (DOOL) spoilers tease that Nicole Walker (Arianne Zucker) could soon find herself in another terrible predicament. Poor Nicole always seems to land in those! She also tends to wind up with secrets and tough choices to make, so Nicole may be headed down a very familiar road.

During the week of March 2-6, Nicole will do some eavesdropping. She may regret that decision after she overhears a very revealing conversation. What will that conversation be about? At that point, there won’t be very many secrets left in Salem except for the one that affects Nicole the most: the baby swap.

DOOL fans will recall that Nicole found out about Sarah Horton (Linsey Godfrey) was pregnant with Eric Brady’s (Greg Vaughan) baby. She decided to keep quiet and let Xander Kiriakis (Paul Telfer) pose as the father instead. That decision nearly cost Nicole her relationship, but Eric thankfully came around and forgave Nicole for hiding the truth.

Now might be the perfect time for Nicole to develop suspicions about Mackenzie “Mickey” Horton. Days of Our Lives spoilers say Gabi Hernandez (Camila Banus) will be Mickey’s bone marrow donor match. It’ll get her off the hook through a plea deal, but it won’t do much to move the baby switch storyline along. Days will have to make that happen another way.

Could Nicole overhear Xander and Victor Kiriakis (John Aniston) discussing their actions? Even if Nicole doesn’t get firm proof, she might suspect that something’s up. Even something as simple as “Sarah can never know the truth about Mickey” would work. Nicole could return to investigative roots and try to solve this mystery.

Days would be wise to let Nicole unleash this shocker for drama’s sake. Nicole was the one who gave Eric his “daughter” back, but she may soon have the power to take her away! Although Nicole’s used to having secrets, she might be torn in this case because the truth would break Eric’s heart.

At the same time, how could Nicole keep something like this from Brady Black (Eric Martsolf)? He’s Nicole’s best friend and someone she’ll always care for. Days of Our Lives spoilers say someone will have to provide updates on the swap, so Nicole may end up being the unlucky bearer of bad news.

Do you think Nicole will reveal that Mickey isn’t Eric’s daughter? Will she figure out that Mickey is actually Rachel Isabella DiMera Black? DOOL fans will want to check back for Days of Our Lives spoilers, updates and news as this storyline revs up.