Days of Our Lives Spoilers: Orpheus Returns – See How Supervillain Messes Up Salem 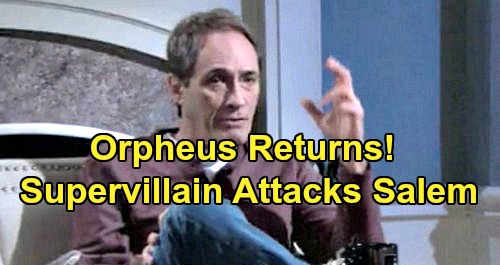 Days of Our Lives spoilers confirm the return of a supervillain that can only be described as pure evil. That’s right, we are talking about Orpheus aka Milo Harp (George DelHoyo). The last time he was seen was in 2016 during a prison break.

Could we be getting another inmate escape storyline featuring Clyde Weston (James Read) and Orpheus once again or could there be an exciting twist this time around? There is the potential that Orpheus could be involved in two separate, but major plots.

Milo Harp is more commonly known as Orpheus and he is one of the most dangerous villains that Salem has ever encountered. Not only is he pure evil with a cold heart, but the character is also an ex-ISA agent. That makes him even more lethal. Prior to his 2016 return, the man was thought to be dead but resurfaced alive and well.

Many years ago, Orpheus kidnapped Dr. Marlena Evans (Deidre Hall) to get revenge on Roman Brady (Josh Taylor). Could this be an updated version of a similar storyline?

It is clear the “new” Stefano DiMera (Stephen Nichols) and Princess Gina Von Amberg (Kristian Alfonso) aren’t giving up on their mission to split up “Jarlena.” In fact, Stefano has a sinister idea that John Black (Drake Hogesyn) and “Doc” need to be killed in order to truly be theirs.

It sounds like Orpheus could abduct Marlena once again, but what about the killer part? Well, that’s why Dr. Wilhelm Rolf (William Utay) is on standby. He might not be in Salem anymore, but you know Stefano exiled him to some private island conducting experiments until he is needed.

That time could be coming, especially since he has perfected the resurrection injection. Could John and Marlena die only to be resurrected by the mad scientist? Would there be brain chips just like the one “Steve-ano” has in order to force love?

After all, kidnapping, killing and resurrecting the iconic couple is pointless unless they can make Marlena love Stefano, and John to adore Gina.

Days of Our Lives spoilers confirm Orpheus will make his reappearance on January 22. The last time he was on screen was in 2006. At that time, Clyde broke out of prison and terrorized Salem with Orpheus and Xander Cook (Paul Telfer).

It was all for his son, Ben Weston (Robert Scott Wilson), who was in a psychiatric facility. Despite Abigail DiMera (Kate Mansi) having a paternity test, Clyde wasn’t leaving without the baby boy. It was a night that Abigail and others in Salem would never forget.

Remember last week when Ben was told he lost his final appeal? That means he remains on death row until his life is snuffed out by the upcoming execution. He has nothing left to lose and Clyde knows that. It is teased that Clyde will try to become Felonious Father of the Year by urging Ben to break out of prison with him.

Under normal circumstances, Ben wouldn’t do anything to jeopardize his freedom. However, it might be the only way for him to find Jordan Ridgeway’s (formerly Chrishell Hartley) real killer and clear his name. Unfortunately, Clyde didn’t suggest a prison break for noble reasons. He is going stir crazy and wants to wreak havoc on Salem again.

With the timing of Orpheus’ reappearance, DOOL spoilers indicate that the villain might be involved in two different storylines. One that involves Stefano’s “killer” plan, plus two villains possibly reuniting in order to cause mischief and mayhem. But where does Ben fit into all of this? What if he refuses to join his father?

Days of Our Lives spoilers suggest Ben has two options. One is to remain on his father’s bad side and possibly get killed… or worse, put Ciara Brady (Victoria Konefal) in harm’s way.

The other possibility (and the one we are banking on) is that Ben needs to play double agent. Make his father and Orpheus believe that he is part of their terrorism team, then double-cross them later in order to save Salem.

If Ben’s name can’t be cleared in Jordan’s death, perhaps he could get a pardon for heroic acts when Clyde and Orpheus prey upon the unsuspecting Salemites? Could he also end up saving John and Marlena, as well as exposing Stefano and Gina’s malicious intentions?

It would kill two storylines with one stone and would resolve the prison “Cin” situation. Stick with the NBC soap and don’t forget to check CDL often for the latest Days of Our Lives spoilers, updates, and news.