Days of Our Lives Spoilers Preview: Week of August 10 – Allie Runs Away, Wants Nicole To Raise Son – Sami & Nicole Battle Is ON 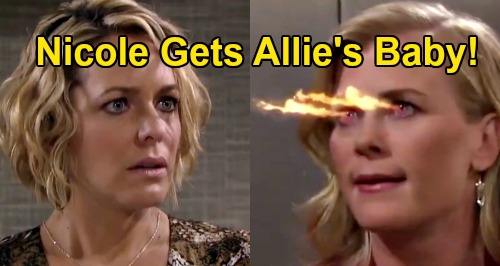 Days of Our Lives (DOOL) spoilers preview teases that Sami Brady (Alison Sweeney) is going to be absolutely beside herself with rage. As DOOL viewers know, Sami outright blames Nicole Brady (Arianne Walker) for just about everything that’s wrong with her relationships with Allie Horton (Lindsay Arnold) and Will Horton (Chandler Massey).

And according to the new Days of Our Lives preview promo for the week of August 10, the already volatile situation between Sami and Nicole will get even worse.

The promo shows some great vintage clips of Sami and Nicole sparring over the years, showing some of their battles over men in the past. “But none of their battles have been over one this young,” the promo announcer says, as the camera zooms in on Allie’s little baby boy.

Well, that’s about to change, as Allie’s going to make a big move this week, August 10-14, that completely horrifies Sami.

In the preview, we hear Sami say, “My daughter took off from the hospital and she left a note.” We then see Eric Brady (Greg Vaughan) pick up the note, which says, “What I want is for Nicole to raise my baby.”

Well, DOOL viewers can imagine how Sami is going to react to that shocker. It should be a bad scene between Nicole and Sami going forward.

Of course, this is all going to come as a shock to Nicole, too, as she looks very surprised in the promo. But since Allie is apparently gone and there’s no one to take the baby, some quick decisions are going to have to be made about what’s going to happen to Baby Boy Horton.

Will Nicole end up taking the baby? Or will Sami try to get the kid away from Nicole? What a mess.

We should note that the promo also shows a brief scene of Allie actually holding her baby, which is presumably something that Allie will do before she takes off.

Clearly, Allie will be hurting and confused about what she wants, and this might prompt her to run off in the first place. But will it prompt Allie to return for her baby eventually?

Time will tell what Allie ultimately does, but something tells us that she’ll be back in relatively short order…but not before Sami and Nicole duke it out over who’s going to care for this baby. Will a legal battle ensue?

But then again, Eric and Nicole will have to consider what’s best for the baby. Sami really isn’t in a position to care for a baby with all of her attention focused on a convalescing EJ DiMera (James Scott) these days. Yet it’s really hard to imagine Sami stepping back and allowing Nicole to be a mother figure to her grandson.

We’ll see what happens here, but it looks like the Sami/Nicole battle will really ramp up this week. You won’t want to miss it! We’ll give you updates as DOOL news comes in. Stick with the NBC soap and don’t forget to check CDL as often as you can for the latest Days of Our Lives spoilers, news, and daily episode recaps.