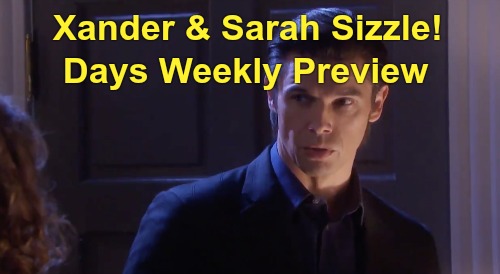 Days of Our Lives (DOOL) spoilers preview teases that we’re in for some hot moments, exciting developments, and major mind control in the coming week of August 3-7. The new DOOL promo for the week of August 3rd is out and it promises movement on three big storyline fronts.

First off, things will get passionate between Sarah Horton (Linsey Godfrey) and Xander Kiriakis (Paul Telfer), as Sarah decides that it’s time to move on from the hurt and anger and give Xander another chance.

Earlier in the week, we’ll see Xander have another talk with his new BFF Jack Deveraux (Matthew Ashford) about his relationship with Sarah. Xander will be very aware that he’s been granted a precious second chance with Sarah, and that he needs to not screw it up this time!

According to DOOL spoilers, Xander will share his fears about his second chance with Jack, and Jack will surely give him some solid advice.

Well, it seems that once Sarah has made up her mind to give Xander another chance, she’ll go all in, as the promo shows her with Xander getting pretty steamy. It appears that Sarah will initiate the romance, as Xander asks tentatively if Sarah is sure that she wants this.

But considering that Sarah is shown flopping down seductively on the bed in front of Xander, she seems pretty sure!

Next, the new DOOL preview shows Eli Grant (Lamon Archey) and Lani Price-Grant (Sal Stowers) at the hospital for a prenatal visit. It makes sense that Lani might need a follow-up appointment after all of her smoke inhalation during the church explosion, or this could just be a regularly scheduled checkup.

Whatever the case, the promo shows Lani asking if the baby is ok.

Judging from the look on Lani and Eli’s faces, it doesn’t look like they’ll learn anything alarming, but Sarah does tell them that “this is rare.” It’s certainly looking like Lani could be carrying twins, which would certainly be a rare occurrence.

Could Sarah have detected two heartbeats during Lani’s ultrasound? We’ll have to wait and see, but it looks like we might ultimately see two babies for Lani and Eli!

As DOOL viewers know, Eve was revealed as Ben’s captor this past week, and she revealed to Ben that she is going to use mind control to turn him back into a killer…so that he murders his own wife, Ciara Weston (Victoria Konefal)!

Ben is shown in the preview restrained to a chair with Eve’s henchman Vincent (Michael Teh) in the background performing certain procedures on Ben. Ben gets injected with substances and shocked while he’s restrained, and it all looks pretty terrifying.

“I am going to turn you back into the necktie killer,” Eve tells Ben in the promo. And unfortunately, there’s not much Ben’s going to be able to do about it.

The good news here is that DOOL spoilers say that Ben will be rescued later in the week, as Ciara, Claire Brady (Olivia Rose Keegan), Hope Brady (Kristian Alfonso), and Shawn Brady (Brandon Beemer) head to New York City to track him down with some help from Chloe Lane (Nadia Bjorlin).

But will it be too late for Ben? He might be back with his beloved Ciara, but ongoing DOOL spoilers say it won’t be long before he’s besieged by visions of violence…just as Eve wants.

It looks like we’re in for an exciting week, so stay tuned! We’ll give you updates as DOOL news comes in. Stick with the NBC soap and don’t forget to keep CDL often for the latest Days of Our Lives spoilers, updates, and news.