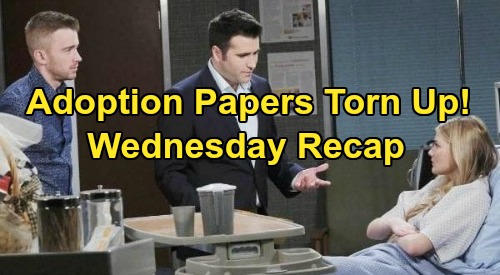 Days of Our Lives (DOOL) spoilers recap for Wednesday, August 6, reveal that Steve Johnson (Stephen Nichols) arrived at Kayla Brady’s (Mary Beth Evans) apartment. Kayla had just come off of a night shift at the hospital, and Steve said that today was the day he was moving in.

Steve noticed the wedding photo of himself and Kayla from their first wedding, and they reminisced a bit. Steve also remembered Kayla showing him the photo when he was masquerading as Stefano DiMera (Joseph Mascolo). Steve apologized for that time, and Kayla said that she forgave Steve.

Steve decided to make Kayla an omelet, and Kayla wondered if it was really ok living in the same apartment that she had shared with Justin Kiriakis (Wally Kurth). Steve reassured Kayla that wherever she was, he wanted to be, and that his home was with her. Steve and Kayla kissed happily.

At the hospital, Will Horton (Chandler Massey) looked miserable as Sonny Kiriakis (Freddie Smith) asked Allie Horton (Lindsay Arnold) if she was giving her baby to Rafe Hernandez (Galen Gering) after all.

Allie relayed that she asked Rafe to adopt the baby again, but that he declined. Allie said that she wasn’t giving the baby to Will and Sonny, either, “because of my brother.” Allie then revealed that Rafe had let it slip accidentally that Will knew about Sami Brady’s (Alison Sweeney) interference.

Sonny didn’t believe it, and Will just stood there looking horrified and not knowing what to say. Allie blasted Will for trying to get her baby for himself and Sonny, and Will finally said he was sorry. Will tried to get a word in edgewise, to explain that he didn’t conspire willingly with Sami, but Sonny exploded and left. Allie told Will to get out.

Meanwhile, at the Labor & Delivery nurses’ station, Sami learned from Rafe that he had just talked with Allie and turned down her adoption offer again. Sami also learned that Rafe tipped off Allie about Will being in on Sami’s scheme.

Sami was horrified. Just then, Will and Sonny burst into the waiting area and Sonny got on the elevator yelling at Will to stay away from him.

Sonny left, and Sami asked Will what was going on. Will exploded at Sami, saying that he was mad at himself for keeping his mouth shut, and that it was all Sami’s fault. “It’s over,” Will said. “Allie hates me, and my husband is devastated because I betrayed him.”

Rafe went back in to see Allie, who was tearing up the adoption papers as he entered. Allie announced that Will and Sonny’s adoption was off, and Allie wondered what she was supposed to do now about the baby.

In town square, Bonnie Lockhart (Judi Evans) argued on the phone with someone, then threw her phone down. Justin, who was sitting nearby, overheard.

Bonnie sat down at Justin’s table and lamented about getting taken advantage of in her book contract – it seems that she was not going to be paid royalties because she hadn’t sold enough books. Justin pointed out that Bonnie had signed the contract, and Bonnie lamented that she needed a lawyer.

“The answer is no,” Justin insisted. Bonnie begged Justin to represent her and she said that she felt terribly about what she had done to Adrienne Kiriakis (Judi Evans) and to him, but Justin still refused to forgive Bonnie or to represent her.

Bonnie said that the book was the only good thing she’d done lately, and she blubbered about having to go back to cleaning houses. Bonnie took off, and Sonny came by. Justin asked what was wrong, and Sonny said the adoption was off.

Ciara rushed over to Ben and found a pulse, but soon Ben stopped breathing. Ciara did mouth-to-mouth and Ben finally regained consciousness. Ben was in a lot of pain and struggled to sit up.

Ben wondered where he was, and Hope and Ciara told him they were just outside of Manhattan. Ben didn’t know how he got there, and as Hope went outside to get cell service, Ben and Ciara talked.

Ben remembered the wedding and the explosion, and he remembered that he woke up restrained. Ciara said that she, Hope, and others tracked Ben down to the warehouse that belonged to a man named Vincent (Michael Teh).

Ben said that he remembered Eve’s hate and rage, but he couldn’t remember anything else. Then Ben remembered Eve sticking him with a syringe, then everything went dark until Ciara found him.

Ciara promised that everything was going to be ok, and Ciara and Ben hugged. As they hugged, Ben spied his necktie lying on the floor across the room. Ben firmed his grip on Ciara.

Out in the entryway, Hope came face to face with Vincent. “You must be Vincent,” Hope said. “I need to talk to you about Eve Donovan and what you did to Ben.”

Vincent said he didn’t have to answer Hope’s questions, and Hope continued peppering Vincent with questions. Vincent tried to overpower Hope, who threw Vincent to the ground and knocked him unconscious.

Hope tied up Vincent’s hands behind his back and stepped away, probably to get cell service. When Hope returned, Vincent was gone.

There’s definitely a lot going on right now on Days of Our Lives, so stay tuned! We’ll give you updates as more DOOL news comes in. Stick with the NBC soap and remember to keep CDL at the ready for all your DOOL news, spoilers, and daily episode recaps.