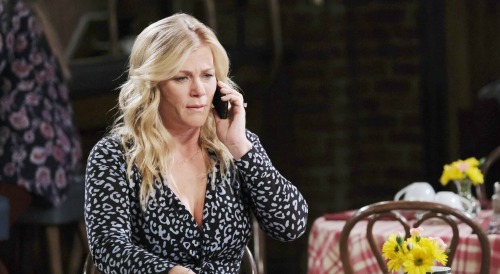 Days of Our Lives (DOOL) spoilers tease that Sami Brady (Alison Sweeney) will move forward with her custody pursuit. Despite Eric Brady (Greg Vaughan) and Nicole Brady’s (Arianne Zucker) outrage, Sami’s convinced that this baby should stay with her.

Of course, everyone’s holding out hope that Allie Horton (Lindsay Arnold) will eventually resurface – and she will according to Days spoilers.

Nevertheless, someone has to take care of Allie’s son in the meantime. Sami certainly doesn’t want Nicole raising this baby, so she’ll keep working hard to make sure that doesn’t happen.

However, Sami may have chosen the wrong lawyer to help her! Belle Black (Martha Madison) was pressured into accepting this case, but it’s clear that she’s torn about it.

Although Belle can understand Sami’s point of view as a mother, she still feels bad for Nicole and Eric. DOOL fans know that it’s Sami’s way or the highway, so her attitude could make it difficult for Belle to work with her.

That’s especially true after Nicole stirs up conflict between the sisters during the week of August 24-28. Eric will also reach out to Belle next week, so Sami’s case may start falling apart.

Days of Our Lives spoilers say Eric will be hoping for some sort of compromise with Belle. Perhaps Eric will count on Belle to stop Sami somehow – or at least try. Belle may be willing to talk to Sami before the custody hearing and see what she can do.

There’s even a chance that Eric will encourage Belle to throw the case. If Belle botches things somehow, maybe Nicole and Eric would look like the more appealing custody option.

Regardless, Sami’s a force to be reckoned with and will fight for what she wants. Right now, what Sami wants is to keep custody of her grandson!

Days of Our Lives spoilers say this custody hearing will come with a major bombshell. Sami will make a daring move, so what’s it going to be? Will Sami fire Belle as her lawyer and represent herself instead? Sami might fear that Belle’s on “Team Ericole” now and won’t work as hard as she needs to in court.

Naturally, it’s possible Sami will shock everyone by throwing in the towel instead, but that wouldn’t be a very Sami-like thing to do. Even with John Black’s (Drake Hogestyn) upcoming medical crisis, it’s tough to imagine Sami waving the white flag. It’d be more in character for Sami to fight to the bitter end.

As other DOOL news and updates roll in, we’ll provide all the latest info. Days spoilers say there’s much more custody drama to come, so keep watching! CDL’s your one-stop source for fantastic Days of Our Lives spoilers, updates and news to catch up on, so stop by frequently.