Days of Our Lives Spoilers: Stacy Haiduk Returns to DOOL – Kristen Sneaks Back to Salem, Visits Lani on Her Wedding Day 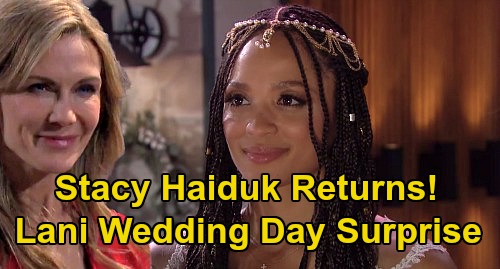 Days of Our Lives (DOOL) spoilers tease that a mysterious character will hit town during the week of June 22-26. Of course, this character doesn’t seem so mysterious when we consider all the facts! For starters, this person will show up in Salem just before Lani Price’s (Sal Stowers) wedding to Eli Grant (Lamon Archey).

It looks like we’ll see this character’s perspective as he or she spies on Lani. A couple days later on June 26, it’ll be the morning of Lani and Eli’s nuptials. Keep in mind that DOOL skipped some preemptions and moved ahead with new episodes, so Eli and Lani’s wedding day will happen a bit sooner than planned.

It’ll be the Fourth of July in Salem, but the actual wedding will air on June 30 instead of July 3, which was the original goal since July 4 falls on a Saturday. Now let’s get back to solving the mystery, which is pretty easy to do since this person reveals him or herself on the morning of the wedding.

Since we know Lani will still be a beautiful bride and get married to the love of her life, we can assume this visitor is a friend and not a foe. Otherwise, this person would stop the wedding or wreak havoc in some way. That tells us that this visitor likely cares about Lani and wants to wish her well on her big day.

The obvious explanation here is that Kristen DiMera (Stacy Haiduk) will sneak back into town and share a little moment with her bestie. Stacy Haiduk was spotted in multiple leaked set pics that line up with a summer return. Days of Our Lives spoilers point to Kristen’s return soon, so it seems this is how it’ll go down.

Kristen is a fugitive and can’t be Lani’s maid of honor, but she’ll probably still want to pass along some sweet encouragement and give her friend a hug. Although Kristen has some flaws and has made plenty of mistakes, she’s grown as a person and cares about Lani.

Kristen will want Lani to know she’s got someone thinking about her before Lani and Eli tie the knot.

Will Kristen also sneak a visit with Brady Black (Eric Martsolf) while she’s in Salem? It seems likely under the circumstances. Days of Our Lives spoilers say some fun scenes are ahead, so you can probably look forward to seeing Kristen again during the week of June 22-26.

We’ll pass along updates as other Days news pops up. Are you excited about Kristen’s DOOL comeback? CDL will have all the hottest Days of Our Lives spoilers, updates and news posts, so don’t forget to drop by frequently.