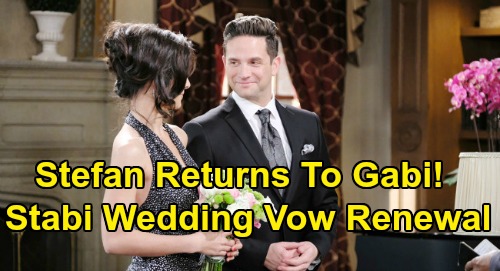 Days of Our Lives (DOOL) spoilers reveal that fans have been seeing the many sides of Gabi Hernandez (Camila Banus) lately. She’s one of Salem’s most complex characters, so let’s look a bit deeper and then predict what’s ahead. To some viewers, Gabi’s as ruthless as ruthless can be. It’s true that Gabi can be cruel, especially when she’s pushed too far.

However, we have to acknowledge that Gabi’s been through a lot. Nick Fallon (Blake Berris) was a total creep who drove Gabi to her breaking point. She eventually went to prison for shooting Nick, but it’s not like he was some innocent angel.

Gabi was terrified of Nick and genuinely worried about what would happen to Arianna Horton (Sydney Brower) if Nick remained alive.

Of course, Days fans know Gabi was later framed for Andre DiMera’s (Thaao Penghlis) murder. She was sent back to prison thanks to Abigail DiMera’s alter (Kate Mansi) as well as Stefan DiMera (Brandon Barash). Gabi suffered a brutal beating behind bars and lost the ability to have more children.

After Gabi forgave Stefan and finally got her happily ever after, it was cut short by Lani Price’s (Sal Stowers) bullet. That wasn’t Lani’s fault since Stefan dove in front of it, but that doesn’t change the fact that Gabi lost her husband – the man she views as the love of her life.

Days of Our Lives spoilers say Gabi’s luck will ultimately turn around – starting with a plea deal that gets her off the hook. Naturally, Gabi will get a full-blown miracle down the road.

DOOL fans can expect Stefan to return from the “dead” around April, so that brings the chance for a “Stabi” reunion. That may take some time if Stefan has amnesia when he first comes on the scene, but Gabi can be patient.

Sooner or later, Stefan and Gabi should be ready for a brand-new chapter. Gabi’s made plenty of mistakes, but she still deserves to get back the love she’s lost. Could this lead to a sweet vow renewal for Gabi and Stefan? That’d be nice to see since their wedding was so rushed and their relationship wasn’t really legit yet.

This could be Gabi and Stefan’s chance at a more romantic Days wedding. They might as well go all out, even if the guest list is short! They’ve established that they only need each other, so a private vow renewal would work just fine.

Days of Our Lives spoilers, updates and news say Gabi will overcome this dark period and come out even stronger!

Would you like to see Stefan and Gabi renew their vows after Brandon Barash’s return? Do you still have sympathy for Gabi despite her actions lately? As other DOOL news and updates roll in, make CDL your hotspot for all the latest Days of Our Lives spoilers.